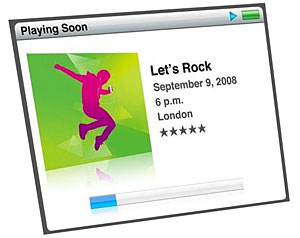 With their usual high levels of secrecy – no doubt accompanied by the ridiculous ritualistic taking down of their Website for ‘updates’ – Apple are expected to announce refreshes to their iPod range in tonight’s “Let’s Rock” launch.

The event will take place in San Francisco at 10 a.m. Pacific time, with a mirrored event in London at 6pm – and naturally we’ll be there battling past the journos and fanboys to give you the updated as they happen.

The iPod touch is widely tipped to see some price cuts as Apple battle with the law of diminishing returns on their hugely successful music player range, while some attention will be paid to the appearance of CEO Steve Jobs, whose recent unhealthy appearance has caused some concern amongst investors.

Expect live updates from the event from shortly after 6pm tonight.