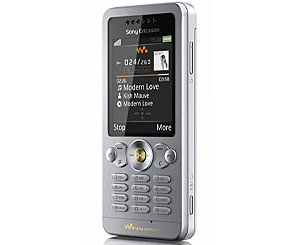 Of the phone released today, the W302 is bottom of the range, a quad-band GSM/GPRS/EDGE handset that comes with a 2-megapixel camera, 3D games, FM radio and Bluetooth stereo A2DP with just a 512MB Memory Stick Micro card lobbed in the pack.

There’s no shake control onboard and the 2″ screen resolution has been shrunk down to 176 x 220-pixel screen. The battery life isn’t as impressive as the other released models at 7 hours talktime and 300 hours standby, although it’s still quite a fine-looking budget phone to our eyes.

The handset measures up at 100 x 46 x 10.5mm, weighs 78g and like its two bigger brothers also released today, will be available in the last quarter of this year, with pricing to be announced.