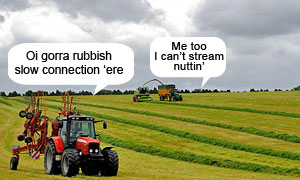 Londoners lap up broadband almost twice as fast as folks in in Wales and Northern Ireland, according to a survey by BBC News.

The speed tests were carried out by Thinkbroadband.com who whipped out the white coats, chewed pencil ends and rifled through papers as they spent two months analysing broadband speeds in no less than 6,000 locations.


They found that the average speed for the UK was 3.2 megabits per second (Mbps), with London rocking to a nippy
4.5 Mbps while Northern Ireland stumbled along at just 2.3Mbs. Taffs didn’t fare much better at 2.6Mbps, while Jocks could manage a slightly speedier 2.9 Mbps.

Not surprisingly, country yokels suffered more than city slickers, with speeds lagging because of extended telephone line lengths and lack of cable access.

Commenting on the figures, Andrew Ferguson, editor of thinkbroadband.com said, “This survey shows us rural Britain may have a higher proportion of broadband homes but those homes are getting a slower service.” 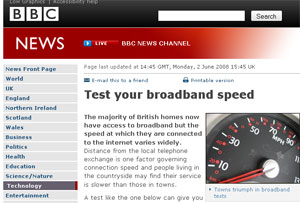 Ferguson blamed the slower speeds on “a combination of telephone line length and the lack of access to cable and other options from BT’s rivals.”

Although BT boasts that 99% of the country can now get broadband, rural customers can still struggle to get the thing downloading fast enough to enjoy services like streaming video.

Test your broadband speed
Via