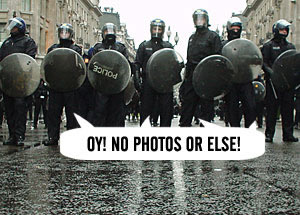 Professional photographers, street shooters, keen amateur photographers and even mobile phone snappers seem to be suffering increasing hassle from The Man when it comes to exercising their right to take photos in public places.

The problem has got so bad that Labour MP Austin Mitchell is planning to lodge a protest with the Home Office about the growing number of cases in which police officers and other officious types try to prevent both professional and amateur photographers from taking perfectly legal pictures in public places.

The Grimsby MP has already tabled an Early Day Motion at the Commons which collected 131 MPs and gathered wide cross-party support.

Commenting on the number of photographers being stopped from taking pictures by police, PCSOs, wardens and by various jobsworths, Mitchell said, “People have a right to take photographs and to start interfering with that is crazy. It seems crazy when the streets are festooned with closed-circuit television cameras that the public should be stopped from using cameras.”

“The proliferation of digital cameras and mobile phones with cameras means that everybody carries a camera these days,” he added.

Mitchell’s Early Day Motion reads (you’ll need to take a deep breath for this one): 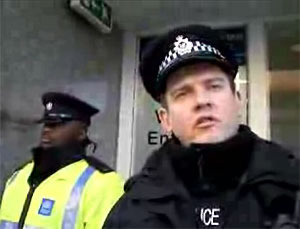 “That this House is concerned to encourage the spread and enjoyment of photography as the most genuine and accessible people’s art; deplores the apparent increase in the number of reported incidents in which the police, police community support officers (PCSOs) or wardens attempt to stop street photography and order the deletion of photographs or the confiscation of cards, cameras or film on various specious ground such as claims that some public buildings are strategic or sensitive, that children and adults can only be photographed with their written permission, that photographs of police and PCSOs are illegal, or that photographs may be used by terrorists; points out that photography in public places and streets is not only enjoyable but perfectly legal; regrets all such efforts to stop, discourage or inhibit amateur photographers taking pictures in public places, many of which are in any case festooned with closed circuit television cameras; and urges the Home Office and the Association of Chief Police Officers to agree on a photography code for the information of officers on the ground, setting out the public’s right to photograph public places thus allowing photographers to enjoy their hobby without officious interference or unjustified suspicion.”

The National Union of Journalists (NUJ) has also been complaining loudly about the growing number of cases where press photographers have been stopped from doing their jobs by the Old Bill and clueless security guards. See: ‘You can’t do that here!’

Recently, NUJ general secretary Jeremy Dear staged a one-man protest outside the Metropolitan Police HQ to highlight the failure of law enforcement officers to protect media freedoms and to echo the frustration of press photographers who are regularly obstructed by police officers who do not understand the law.

A poster on the popular web community site urban75 recently suffered similar harassment while taking photos on a public street in London and posted up a transcript:

Security guard: “Oy! Oy! You! You with the camera!”

Photographer: “Err, yes, I can actually”

Security guard: “Don’t give me attitude. If I say you can’t take pictures you can’t”

Photographer: “You’re wrong, actually. I’m on a public highway and I am perfectly entitled to take pictures of anything I like thanks. That’s UK law.”

Security guard: “Go on then, Take try and take another picture”

Photographer: “I’ve already got the picture thanks”

Security guard: (aggressively pointing his walkie talkie in my face) “Go on. Take another picture”

Photographer: “are you threatening me?”

Security guard: (louder and more aggressively) “Go on. Try and take a picture again. Go on”

Photographer: “OK, if you insist.” (takes another picture).

Security guard: (puts walkie talkie to mouth and shouts) “Get me the flying squad!”

Photographer:: Bursts into laughter and leaves.

In our follow up article we’ll be detailing your legal rights and pointing you to some useful legal resources, but we’d love to hear your experiences too.