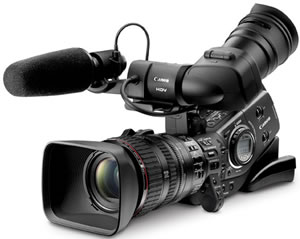 Canon’s XL-1 camera range has been a fave with the prosumer video camera market for years … actually stretching as far back into the previous millennium.

Today they’ve announced an updated version, the XL-H1S and XL-H1A HD – both capable of shooting in High Def.

What’s the difference between the two of them?
The XL H1S model incorporated HD-SDI (SMPTE 299M)/SD-SDI (SMPTE272M) output with embedded audio and time code, providing a raw, uncompressed 1.485 Gbps signal – pretty hefty stuff. You’ll be paying an extra $3k for that feature.

Changeable Frame Rates
With more than a nod to the fact that video footage shot on the cameras can be used for all sorts of output, the Frame Per Second (FPS) the camera shoot at can be varied. FPS rates include 60i for mainstream production; 30F for perfect frame grabs or Web delivery; and 24F for emulating the look of motion-picture film. Canon’s Factory Service Centre can also provide an optional upgrade to add 50i and 25F frame rates.