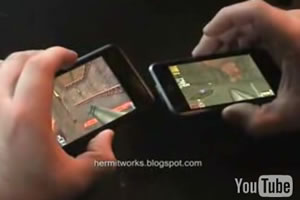 Thanks to PapaSnuff for sending through the video of Quake 3 running on an iPod itouch and it looks pretty cool.

It’s been reported that the hack was carried out by Scott from games developer Hermitworks. Being a hack, don’t expect a release date.

Navigation through Quake 3 appears to be done using the tilting sensors that are built into the iTouch.

A huge part of Quake has always been the weapons, so fans will be pleased to hear that firing the gun currently in your hands is via the touch screen.

There’s little else to report at this stage, but we thought you’d like the video :)