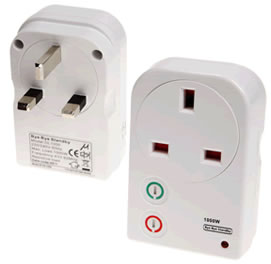 We’re all keen on doing our part on not destroying the planet these days – and quite rightly too.

For quite a while, we’ve known that much electrical equipment uses a lot of electricity in standby mode – sometimes, with things such as PVRs, actually more power!

A company calling itself Bye Bye Standby released its new Energy Saving Kit back in September 2007 in the UK.

Today they’ve made it be know that the US equivalent product is now increasingly available.

What is it/ How does it work?
It looks like the old timers that switched on and off lights when you were out for the evening, or on holiday.

The difference with this version is that it comes with a remote control that lets you switch it on/off … errr, remotely.

Effectively all of the laziness enjoyed by the TV viewer when they hit the off/standby button on their TV remote, is delivered with Bye Bye Standby, but you’re not chewing up the planet’s energy up at the same time.

By the same measure, turning everything on is as simple as hitting the On button.

Power extension blocks can be connected to the sockets so a number of units can be turned off using just one of the units.

Many codes
So you don’t end up switching your next door neighbour lights or TV off at a vital moment, two dials on the units enable different code to be selectable.

Grouping too
The remote has four separate on/off button, enabling you to control a number of separate units. There’s also a Group function, that lets you turn on/off all of the appliances that you’ve chosen to group together.

Imagine that … you’d just have to walk into a room to have the lights turn on and switch your TV on – the ultimate in laziness!

We’re getting a selection of the kit in to try it out and will let you know what we find out.

Costs
The entry level product in the US are priced at $30 and available now.

The starter pack, including three sockets and a remote costs £30 in the UK.