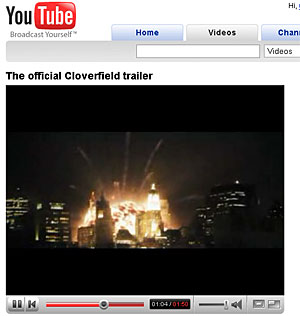 Online trailers are now proving to be a vital part of a new film’s marketing, with a short web teaser able to generate a substantial buzz prior to a movies release.

The latest Indiana Jones sequel – due to open on May 22 – has been trailed online for nearly a month, with millions of fans clicking through to get an eyeful of the promo.

According to the feedback generated, the trailer for ‘Indiana Jones and the Kingdom of the Crystal Skull’ has managed to convince punters that the film wasn’t going to be a turkey. 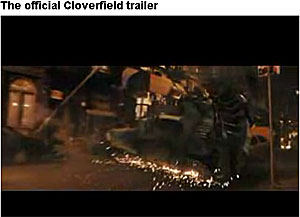 “It does a great job in showing that Harrison Ford is back as Indy along with the character’s trademark humour and action,” enthused Mirko Parlevliet of movie news website ComingSoon.net.

With less folks watching telly or attending movie theatres, the big studios are taking to the web to big up their new blockbusters. A recent survey of film fans by the Motion Picture Association of America found that nearly three quarters (73%) looked for information about films online and over half of respondents (54%) saw ads or trailers online.

“Trailers build up momentum because people love to talk about the movies,” commented Patriquin.

“As fans become more accustomed to getting movie news online, studios realize they can “manipulate and supercharge buzz online,” he added.

The Paramount web team went to town for the January film Cloverfield, running a Net-based viral marketing plan that “weaved an experience” around the scary monster film, with Patriquin observing that the campaign “kept the monster a mystery, pulling in moviegoers the first weekend who wanted to find out what he looked like.”

The ‘official Cloverfield trailer‘ on YouTube currently has just under 3 million views, although the Paramount viral team may not have been chuffed to read this review:

“The lamest movie ever! No score or soundtrack, no director views, no great photo, no intern logic, no explanations, lame ending with no answers, totally wack scenario, dumbest characters ever, no credible actor, no emotion, rare special effects, shaky amateur cam all along. it costed nothing and gave a huge load of money for the producer.”