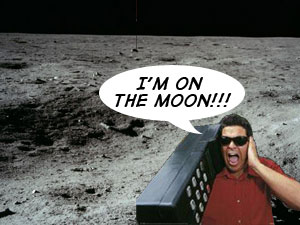 White coated British boffins with top pockets stuffed full of pens are proposing to build a mobile phone network that works on the Moon, enabling robots and astronauts to chat to each other during the construction of the international moon colony planned for 2020.

The system will initially employ two orbiting satellites which will be orbiting the Moon colony and enable Moon-to-Earth communication, although the technology would most likely resemble satellite networks of the late 1980s and early 1990s.

The scheme was contained in a report compiled by NASA and the British National Space Centre who are working on ways to work together on Moon missions in the coming years.

Amongst other plans reported on Silicon are a space probe called MoonLITE (Moon Lightweight Interior and Telecoms Experiment) which blasts probes into the lunar surface and sends back information on earthquake activity using a mobile phone protocol. 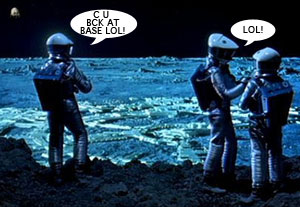 “The proposed missions provide an opportunity to harness the UK’s world-class expertise in small satellite, communication and robotic technologies focused on exploration of the Moon,” commented Professor Keith Mason, chief executive of the Science and Technology Facilities Council.

“This joint report represents a milestone in our co-operation with NASA while building on our longstanding collaboration in highly successful science missions such as Swift, Stereo, Mars Reconnaissance Orbiter and Cassini,” he added.

The plan has now been beamed off around the world for peer review by top scientists and if they feel the love for the venture, a test network will launch in 2012.

Also: Google search of Moon could result in $20 million