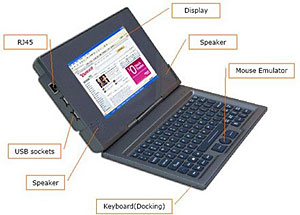 Mover over Asus and tell Eee the news – there’s a new bargain basement laptop in town, in the shape of the Elonex One, set to retail for under a hundred quid.

The super, nay ultralow cost laptop is set to be wowing Brummies when it’s introduced at The Education Show in Birmingham on 28th February.


As reported in The Times (funnily enough by good chum of Digital-Lifestyles, Mark Harris), the el cheapo laptop is aimed at “adult learners, business users, people who are constantly mobile, elderly people and first time Internet users,” and Brit makers Elonex are hoping to shift 200,000 of them by the summer.

For under a ton, users will get a free word processor, spreadsheet, MP3 player, photo editor web browser and e-mail software. 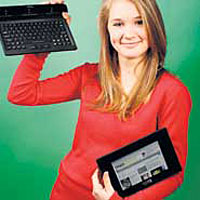 Running on Linux, the system lets users store files on the 1GB of built-in memory or on a ‘tough digital USB wristband’ offering up to 8GB of memory. There’s also Wi-Fi onboard, with a Bluetooth version offering 2GB of memory available for £20 more.

The novel design means that as well as being be used like a traditional notebook computer, the screen can detach to create a portable ‘tablet.’

Details (and product photos) are pretty scarce at the moment, but we’ll keep you updated as soon as we hear more.

One thought on “Elonex Unveil £99 Laptop”