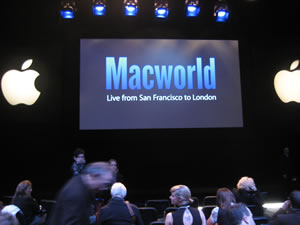 Apple once again held a live link-up between the Moscone Center in San Francisco and the BBC in Wood Lane allowing UK and other European media and guests to see Steve Job’s keynote (London guests including Charles Dunstan of Carphone Warehouse, who seems to be building an intimate relationship with Apple).

Pascal Cagni (EMEA GM & VP) opened proceedings and gave a short talk, the EU is now the fastest growing region for Apple and he gave a break down of Apple achievements in the last few months. 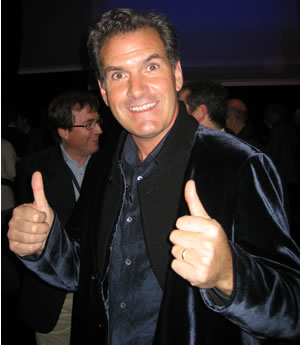 Apple now have 14 retail stores and are working towards 516 premium resellers in FY08 (i.e. stores which have a significant Apple presence).

Apple is rapidly growing in the education market and has a 60% share of the UK MP3 player market (by volume).

Steve Jobs then appeared (via video) in his characteristic trainers, blue jeans and black polo top and he also gave a few stats.

5m copies of Leopard sold worldwide in the first 90 days and 19% of all existing MacOS X users have upgraded. This means there must be about 25m MacOS X users worldwide.

He then went on to announce the new products. 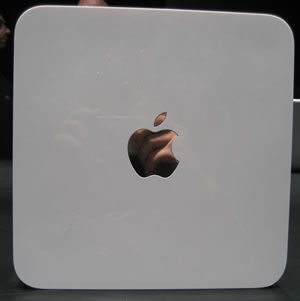 Time Capsule
Time-Capsule is basically an Apple Airport with built-in disk. It works with Time-Machine and allows MacOS X clients to save snapshots of their system, so users can go “back in time” and retrieve any data they may have deleted.

It supports both Ethernet and WiFi (802.11n), full Airport functionality and comes in 500GB and 1TB versions.

It only works as a Time-Machine back-up system so has no NAS/SAN capabilities (yet?).

iPhone Upgrade
The iPhone has sold 4m units in 200 days (US) and now accounts for 19.5% of all smartphones sold, RIM still lead with 39%.

Apple are still saying the iPhone SDK will ship end of Feb.

The new announcements are: –

* Google MAPS with location. The iPhone now identifies its own location and can work out directions between locations. It uses both the normal cell location info (there’s no GPS in the iPhone) and also WiFi info. Google themselves provide the cell location technology, while the WiFi information comes from Skyhook.

* Webclips. This allows going to a website, web page and even drilling down into a web page and zooming into that section and saving the “clip” to the homepage. When a user taps the webclip, they are taken straight to the original site.

* Custom Home screens. The user can move buttons around, what goes into the dock etc. There can be up to 9 home screens and the user can put any button on any screen. Just tap and hold the button you want to move and all the buttons start to “jiggle” and it can then be moved.

3 thoughts on “Apple Macworld Keynote: The Detail Part I”