More and more Americans are ‘vanity searching’ – typing their own names into Google – with many also using search engines to sniff out info about their friends, co-workers and romantic interests.

A new report by the Pew Internet and American Life Project found that 47 percent of U.S. adult Internet users have used Google or other search engines to find out information about themselves.

Although this figure is more than twice the 22 percent of users looking themselves up in 2002, Pew senior research specialist Mary Madden expressed surprise that the growth wasn’t bigger.

“Yes it’s doubled, but it’s still the case that there’s a big chunk of Internet users who have never done this simple act of plugging their name with search engines,” she said.

“Certainly awareness has increased, but I don’t know it’s necessarily kept pace with the amount of content we post about ourselves or what others post about us,” she added. 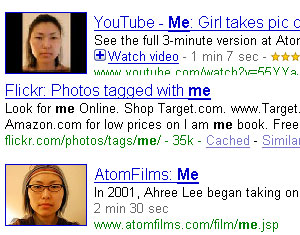 The telephone survey – involving 1,623 Internet users – also found that 60 percent aren’t bothered about the extent of information about themselves online, despite increasing fears about how such data could be used.

The biggest self-Googlers (that almost sounds sexual to our ears) were Americans under 50 and those with more education and income, some of whom may be concerned about how their online persona might appear to potential employers.

The study reported that only a few users were persistent self-Googlers, with around three-quarters saying that they’d only looked themselves up once or twice.

Happily, most discovered that the information they found online was accurate with just 4 percent saying they’d unearthed embarrassing or inaccurate search results.