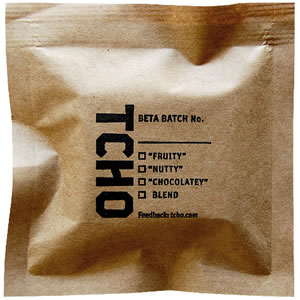 We all used to love the early days when the new Wired magazine came out, right? The anticipation of the magazine which actually ‘Got it,’ alone in a world where all other magazines were clueless.

Well, after selling off Wired magazine and wired.com off for not nearly as much as he wanted to get for it, Wired founder, Louis Rossetto floated off to enjoy his life. Well now he’s back with a totally different business – Tcho, selling fine hand-made chocolate.

Starting off as an investor in the business, Rossetto is now its CEO, working with the companies founder, Timothy Childs who has the great title of Chief Chocolate Officer.

The NY Times tells us that today Tcho dark chocolate is going on sale, in beta of course. The Version 0.10, $4 a bar, brown paper-wrapped chocolate made from Ghanaian beans will only initially be sold to people who visit their premises on Pier 17 in San Fran.

Tcho describes it as “where technology meets chocolate; where Silicon Valley start-up meets San Francisco food culture.” There’s more info on the company and the chocolate on their site.

What’s chocolate got to do with Digital-Lifestyles? Nothing, but given the joy that the early years of Wired gave us, we’re just happy to give Rossetto a plug.