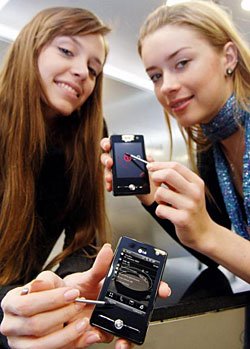 Trying to kick over some of the Apple party tables before Friday’s iPhone’s launch is LG’s new business smartphone, the LG-KS20.

Announced at the IFA 2007 in Berlin, the LG-KS20 HSDPA touchscreen smartphone will initially be released in France and Germany with other countries following hot on its trail.

Evoking memories of the recent ‘Life On Mars‘ TV programme, a pair of dolly birds were roped in to ‘sex up’ the product, with the 70s-style press photos showing the two glampussies lovingly caressing the new phone.

You can imagine the creative meeting:
LG boss: “Make it look sexy!”
Creatives: “But it’s just a black slab that looks like every other phone out there”
LG boss: “Sex sells! It has to look glamorous!”
Creatives: “But it’s just a bland black box with an average size screen and no innovative features. There’s nothing sexy about it at all.”
LG boss: …thinks… “Then call in the hotties! Problem solved!” 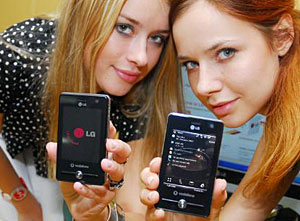 We’re not entirely sure that a 2.8 inch 240×320 pixel colour touch-screen, 2MP camera, WiFi, MP3 player and Bluetooth would be enough to bring such an adoring smile to the model’s faces, but it seems a fairly well specified device for business folks.

Internet access should be fairly nippy too with HSDPA-toting, 12.8-mm thick handset serving up 3.6Mbps data rates, while the unit coming with a telescopic, built-in stylus which will most certainly be needed for the fiddly Windows Mobile 6 interface. 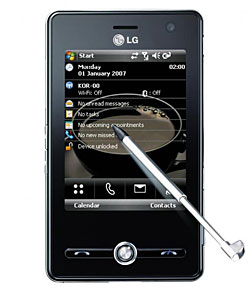