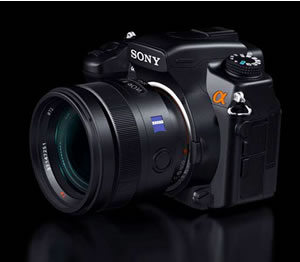 Sony are claiming a first with the a700. They say the “advanced Exmorä CMOS sensor performs A/D conversion using dedicated converters that are located close to each element array on the sensor itself.” The thinking behind this is to try and reduce the amount of noise in the shots.

A new shutter mechanism has been developed that give a shutter speed of 1/8000 sec, giving you the ability to catch fast moving action. 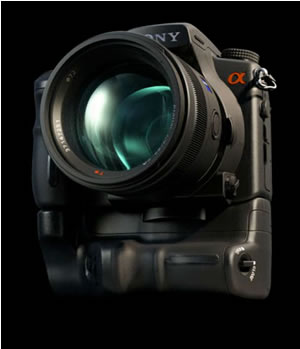 The new shutter unit also gives the advantage of speeding up continuous shooting, thanks to the high-power coreless motor and double-stopper anti-bounce mirror mechanism (got that?) In JPEG Fine or Standard mode shooting is limited only by free media card capacity, while a single burst of up to 19 frames can be captured at 5 fps in RAW.

Back Display
There’s a 3″ screen on the back, that Sony are calling Xtra Fine. Sony say that it’s the highest res screen on a dLSR, which is understandable when you hear it’s got 921k dots.

It’s going to be available from mid-October. Prices unclear currently.

Keeping Shtum
We’d been given the heads up by our friends inside Sony that a new camera would be popping out this week, but being true to our word, we held back in telling you – sorry. Don’t think we weren’t tempted when we saw other publications speculating about its release and specification.

Well done to Photography Blog who spotted that a couple of Sony sites had released pictures and some specification by mistake – or was it a leak – you can’t really tell these days.

4 thoughts on “Sony a700 dSLR Announced”