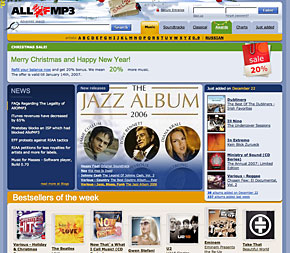 AllofMP3.com, the hugely popular Russian music download site (as we’ve been covering) has been closed down again after Russian authorities caved in under the relentless diplomatic pressure from the international record industry and governments.

The music download site, the second most popular in the UK after iTunes, flogged songs at a fraction of the cost of other sites, thanks to its alleged cavalier attitude towards copyright law.

The site’s owners, MediaServices, staunchly defended their service and claimed it was legal under Russian law, but the rest of the music industry tended to disagree somewhat:

“Allofmp3.com violated copyright law in Russia and internationally by ripping off artists and creators, taking music that it had no right to reproduce and selling it worldwide,” said a statement from the International Federation of the Phonographic Industries (IFPI).

British Phonographic Industry head honcho Geoff Taylor was also chuffed at the sites demise, telling the Register that, “the reported closure of AllofMP3 is welcome news, and another important step for the recording industry as we seek to direct consumers away from illegal online services towards the many legal alternatives.” 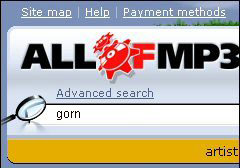 Going, going… back?
MediaServices isn’t going down without a fight though, and continues to sell cut-price music through allTunes.com and what appears to be a clone of AllofMP3 called MP3Sparks.com, purportedly owned by a different company called Regiontorg.

This offers an identical interface and shifts tracks at the same bargain basement prices of $0.10 and $0.20 each.

The company insists that it pays royalties from its cheapo tracks to Russian collection societies, who, according to the IFPI, have no brief to represent Western music interests.

Taylor was having none of it, and appealed to UK music fans to, “stay away from these illegal Russian sites, which are unlicensed parasites that make no investment in music and do not pay royalties to the artists concerned. True music fans should not support them.”

2 thoughts on “AllofMP3.com Gets Closed Down”