With the fortieth anniversary of the first ATM, or cashpoint as it’s known in the UK, the BBC has an interview with the man who came up with the idea, 82 year old John Shepherd-Barron (pictured).

He recounts that the original idea for the dispenser was chocolate bars – true currency in some people’s minds – but this was replaced with the far more profitable idea of dishing out money.

Along with the ATM came the invention of the PIN (Personal Identification Number), required to validate the identity of the user. John Shepherd-Barron’s original idea was to use a six digit number – he found that he could remember his army number with ease – but after discussion with his wife, the PIN was shortened to four digits.

Enfield – King of International Finance
The glamorous location for the world’s first cashpoint was Enfield, snuggled near the outer reaches of the North London, just inside the M25. There’s now a blue plaque marking the location 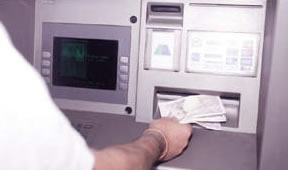 UK TV figure at the time, Reg Varney from On The Buses, was chosen as the first user of it (presumably to ‘connect to ‘the people’). Given that plastic cashpoint cards hadn’t been invented by then, cheques impregnated with a ‘mildly radioactive substance’, carbon 14 were used in their place.

By way of showing the shocking difference between the near-innocent days of 40 years ago and now, the cashpoint dispensed a maximum of £10! As Shepherd-Barron says, that “was regarded then as quite enough for a wild weekend.”

The Future – No cash
Shepherd-Barron is quoted as saying that he sees cashing being phased out in the “next 3-5 years,” as “Money costs money to transport.”

It may be convenient for banks to remove paper moolah from our hands, but there are many, many other members of society who don’t want to see this happen. If there is an attempt to force this onto people, expect the growing interest in local currencies – like the Totnes Pound – to grow even stronger.

Shepherd-Barron went on to cite NFC technology as a big step forward in paying for things quickly and simply.

The man who invented the cash machine