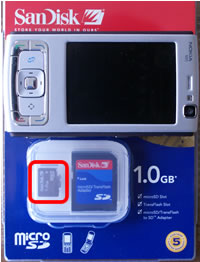 Obviously we’d seen a few press shots of them around, but that doesn’t prepare you for actually getting them in your hands – or fingertips.

It’s not news that the capacity of memory in increasing and that the amount of physical space needed for that memory is reducing, so we thought it would be fun to do a comparison.

We dug out some old memory – NEC D41256C-12 to be precise – which was the state of the art circa 1979/1980. It has been bought on eBay five or so years back as parts insurance for the in-house Stargate Defender machine we love sooo much. 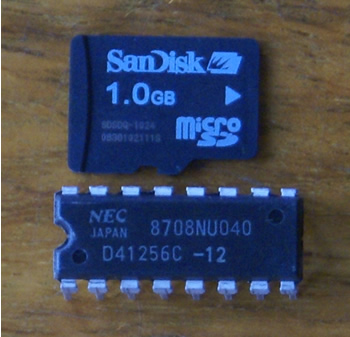 The comparison shots of the 256K (yes, kilobytes) memory chip against the 1GB San Disk micro-SD – yes, it’s 4,000 times the capacity (depending on your definition) – are bonkers aren’t they? SanDisk also have a 2GB and 4GB versions on their site too. 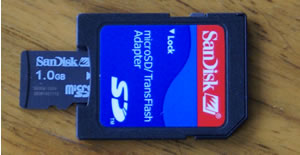 Considerately SanDisk include an adaptor to enable it to be right-sized to fit in most memory card readers – and frankly more handleable.

Using it with the Nokia N95
Plugging it in to a Nokia N95 was simplicity itself with the N95 just softly beeping in recognition. 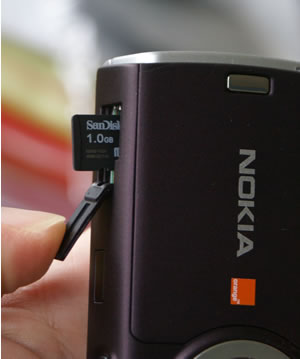 Checking the photo capacity of the N95 with the 1GB inserted, we were impressed to find the N95 reporting space for 1149 5Mpx photos or 46:57 minutes of video recording at the TV high quality setting.

Now with a decent amount of memory on-board we can knock ourselves out with voice recordings.

We suspect that the addition of this memory will start to expose the quality of the N95 to us.