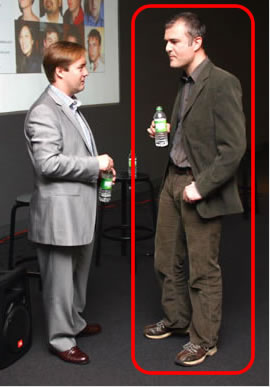 A little bird has told us that they have received an email from Christer Holloman of … shock, horror … First Tuesday. It’s time to sell up and ship out of any and all Internet-touching businesses as Christer tells all that they are to carry out a “secret launching event in London after the summer.”

First Tuesday, the Bastard child of Nick Denton (See picture) and a couple of others, quickly became a byword for greed in London back at the end on the ’90’s.

I remember going to one of the events at St Johns in Clerkenwell and seeing Dear Nick bathing in the adulation and press attention as willing underlings ran around carrying out his whims. All the time, the keen and the desperate shuffled around the crowded venue pitching their daft ideas to anyone who might listen. Those with an investors badge were instantly thronged by wide-eyed hopefuls.

It’s hilarious to see that Darling Denton is trying to re-write that history in his Valley Wag post, by bemoaning that “the true believers were displaced by carpetbaggers, opportunists, lawyers and consultants.” Wouldn’t inserting “actively” before the ‘displaced’, be more accurate Nick?

The Original First Tuesday worked exactly as the Nick-ster had intended, putting him in the middle of the venture funding circle of London, and giving him the media spotlight as the sugar coating.

It’s something that I used to despise – his approach of success at any cost – but having watched him carry it out serially for tens of years, I’ve now come to truly admire it. It’s not for me, but at least he’s been consistent.

Back to the re-birth of First Tuesday – this time it looks like they’re trying to re-birth it as a membership scheme as the email mentions “annual membership (worth £440-£740).” Good luck with that.

It’ll be a shame to see the Web 2.0 go, but with the First Tuesday news, it’s hard to see how it can go any other way now.