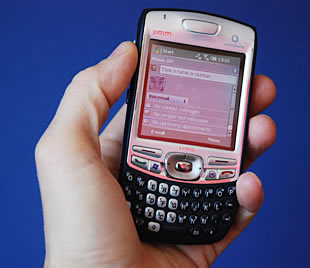 We love playing with the latest widget-packed smartphones, but after a brief and ultimately rather unpleasant sojourn into the world of Windows Mobile, we ran screaming back to our Palm Treo 650, despite its age.

Over two years after the release of the wildly successful Treo 650, Palm released the Treo 750v, a Windows version of their popular smartphone and it’s now available contract-free in the UK.

Would it be enough to tempt us to jump back to the world of Windows?

Look and feel
First off, we have to say that the phone looks fabulous, inheriting the ergonomics of the Treo 650 but adding a sleek non-slip rubberised finish, a slightly smaller profile and, of course, no trademark pointy-stick antennae. 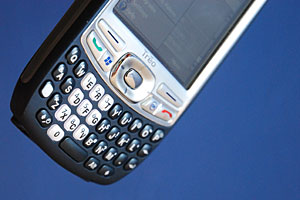 Sure, it may not be the smallest smartphone around, but it fits beautifully in the hand, has a reassuringly solid weight and looks very business-like in its natty dark blue and silver finish with backlit QWERTY keyboard.

Unlike some of the teensy weensy, delicate looking numbers we’ve seen, this definitely looks like phone that can handle the rough and tumble of the boardroom – and a boozy night in the pub after.

Next to the D-pad can be found a Windows key for accessing the ‘start’ menu and a handy ‘OK’ button which saves you having to yank out the stylus to close programs and dialogue boxes (something that Windows Mobile users will be very familiar with). 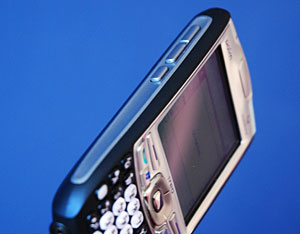 Side views
On the left hand side of the Treo there’s just a volume up/down control with a customisable function button below, while the opposite side has nothing more than a covered flap for the mini SD card slot and an infra red port.

Although we’re always up for sleeker and smaller memory formats, we find the miniSD card an annoying addition.

Almost all of our other gadgets use the larger SD card, and it’s handy being able to ‘borrow’ the card out of the Treo 650 when memory space on our camera runs low, or transfer images directly off the camera’s card into the Treo for resizing and emailing.

The mini SD card also meant that we were unable to add Wi-Fi to the Treo using the Sandisk Wi-Fi SD card we bought last year. There are, however, some miniSD Wi-Fi cards becoming available now. 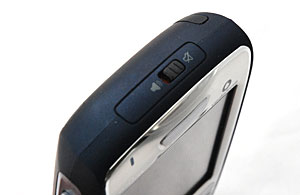 Top, back and bottom
One of our favourite features of the Palm can be seen in the top of the phone along with the stylus silo: the on/off switch.

Anyone used to battling with endless menus just to turn off the phone’s ringer (and then never being quite sure if it’s actually turned off or not) will love Palm’s simple solution which lets you turn off the device with a simple switch (with a short vibration for confirmation).

On the back of the camera can be found a 1.3 megapixel camera with a 2x digital zoom, a large speaker and a shiny button that acts as a mirror for self-portraits (although the convex shape means that you’ll end up looking like Joyce Grenfell).

The phone cover slides away underneath the camera, with a 1200mah battery and SIM card slot lurking inside. 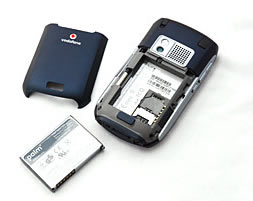 The bottom of the phone houses the headset jack, sync/power connector and the microphone.

Although some may prefer it if Palm used a mini USB jack like most other smartphone manufacturers, it’s good to note that older Treo cradles will work with the 750v.

In part two, we listen to the call quality and consider the merits of the keyboard and camera.