After our Numark CD1 Mixer developed a worrying penchant for spontaneous remixing (resulting in a sea of unimpressed glares from the dance floor), we feared that the machine may have been subjected to a Ramones song too many.

After testing at home, we realised that CDs that played perfectly well on other players were jumping all over t’shop on the Numark and that it had become more sensitive than usual to vibration.

If you’re a DJ playing out on a Saturday night, you’re likely to feel more vibrations than most with the dance floor bouncing to an air punchin’, all gyratin’ crowd (or an advancing angry mob demanding that the idiot behind the decks is removed tout de suite), so a sensitive CD deck is not good news. 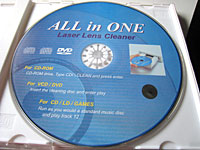 We took the Numark into our testing labs (OK, the kitchen table) and gave it a good clean before resorting to the rather unscientific method of opening the CD trays and blowing like billy-o inside, all to no avail.

Testing the CD cleaner
In desperation – and with a DJ booking looming at a venue noted for its no-nonsense crowd – we thought we’d give the Lindy Multi-format CD/DVD Lens Cleaner a go.

Opening the packaging was a little disappointing. We were expecting hi-tech sprays, advanced lotions and cunning cleaning mechanisms, but all we found was a CD with a rather comical mini shaving brush sticking out in the middle. 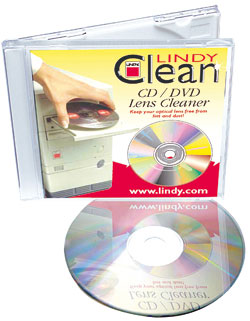 The instructions were equally unfussy, with a simple exhortation to shove in the CD and play track 12.

Naturally, we were intrigued what lived on the other tracks, and discovered curious snippets of avant garde industrial
metal machine noise, before track 12 started up with a burst of jaunty Euro-pop.

Before we had chance to put on our pink leg warmers and get grooving, the track went silent while (we presume) the little brush does it head cleaning thing for about 20 seconds.

We ran the cleaner on our Numark CD1 a couple of times and are pleased to say that it seemed to do the business, with the decks working fine at the gig next day (although we’d also mounted the player on a mat of bubble wrap, just to be sure).

Of course, contrary to the famed Tomorrow’s World demonstration where it appeared that CDs were so tough, they’d probably outlive several direct nuclear hits, some CDs do fail no matter what.

We’ve had more than enough expensive CDs (as well as dodgier MP3 copies) fail miserably mid-gig, but if your CD player is in tip top shape there’s more chance you’ll be spared dancefloor disasters, so it’s worth giving the Lindy cleaner a spin.

Don’t expect miracles though, as we’ve seen more than enough CD players terminally self-destruct, but at just a fiver the CD cleaner looks to be worth a pop.