It will be interesting to see if the now-formidable legal department of Google drops a letter to a new site, GodTube that apes their YouTube video service.

GodTube, you won’t be surprised to hear, shows videos that praise god. It’s yet to launched, with the expected out-of-beta date being 1 May.

Looking at the site, loving god doesn’t necessarily mean that you observe the rights of those who have gone before you. The less-than-coincidental name similarity isn’t the only thing that will remind you of YouTube. GodTube also closely-mimics the general look and feel of YouTube.

Similarities don’t end there, they even stretch to the GodTube strapline Broadcast Him, only a small adjustment from YouTube’s Broadcast Yourself.

Listening to GodTube’s CEO, Chris Wyatt, speaking on Fox News, he claims to have “come up with the idea for GodTube” when he was attending a seminary in Dallas. Quite what the idea he came up with he didn’t elucidate, but if it was “I know let’s copy YouTube, but call it GodTube,” we’d hardly call it an idea. 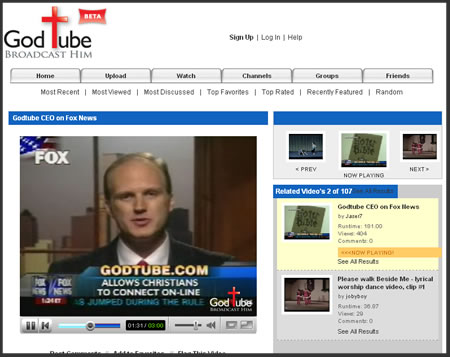 By trafficked, we assume he means the amount of bits that they shift. As they’re putting out video (the most bit-laden content format available), his claims start to sound significantly less impressive.

One area GodTube differs significantly from YouTube is in how open they are in showing the videos of those who want to upload content to their site. YouTube doesn’t put a human filter in the way, understanding that given the number of videos that are uploaded, it just isn’t realistic.

GodTube may struggle with their approach, suffering a plague of videos rather than the mythical plague of locusts. They’re going to pass all submitted content through two manual filters – real people. The first will check if it’s presentable to the public, the second to ascertain its Theological implications!

Here’s a little sample. It’s only a minute long, but will give you an indication of what to expect. Get read for an explanation of a banana. We kid you not.