To say it’s been inspired by the Ricoh GR would be something of an understatement – with its plain black body, fixed 28mm lens, hotshoe and attachable viewfinder, this thing’s more of a ruddy homage.

What it lacks in originality it more than makes up in specs, sporting a Foveon chip image sensor “approximately 12 times larger” than what you’ll find lurking in your average point and shoot camera.

A bigger sensor should lead to a much cleaner image, with less noise and significantly better low light performance, but we expect this innovation to come at a thumping big price (as yet unannounced).

The camera shares the same design lines of the Ricoh, but that large sensor means that it’s substantially bulkier and more box-life, so street photographers will have to decide whether the extra resolution is worth lugging around a bigger camera.

The front of the camera is pleasingly simple, with the top plate carrying on/off, shutter and mode dial controls, with a jogwheel control below for manually focussing (a nice touch)

The back of the camera sports 2.5″ LCD with the usual controls, curiously finished in a rather garish and cheap looking silver finish (Street shooters usually like their cameras to be as plain as possible – legendary snapper Cartier Bresson famously stuck black tape all over his expensive chrome Leica to make it less conspicuous).

Traditionally, RAW write speeds on digital compacts fall into the so-slow-it’s hardly-worth-the-effort category, but Sigma are claiming that full resolution RAW files will be “recorded so swiftly that the DP1 won’t ever feel slow. It’s just like using a DSLR.”

The 28mm fixed lens is disappointingly slow at just f4, but this may be compensated by improved high ISO performance.

We have to say that we’re intrigued by this camera, even if it’s only really playing catch up with the Ricoh GR when it comes to the feature set.

Many of the improvements that GR users have been looking for – image stabilisation, optical zoom and a built in viewfinder – are all noticeably absent from the Sigma, and the camera’s macro can only focus down to just 30cm compared to the GR’s incredible 1cm.

However, with the SD1 offering dSLR performance in a (large) pocketable design, this could be the perfect carry-everywhere second camera for pro users. 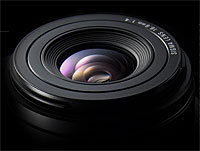