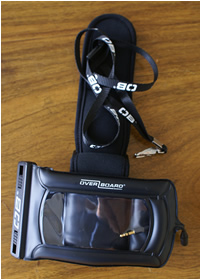 Waterproof gadgets aren’t just for the lounging by the pool in the summer. Despite its rather alarming name (“Stop the ferry! iPod overboard!”), this case promises to protect your tunes from the worst the winter weather can throw at you, as well as providing full waterproofing to a depth of six metres for summertime use.

The £15 case is made from padded vinyl, with a clear window to let you see what your player is up to. It’s been designed for market-leading Apples, and an 8th-gen 80Gb iPod does indeed slide in extremely snugly. A close fit is important to avoid excessive motion, which can damage miniature hard drives. However, if you’re planning to use the OverBoard for vigorous jogging or skiing, a totally solid state player such as a Nano will always be more resilient than a hard drive unit.

Despite being designed for full-size iPods, which have the headphone socket on the top right corner, the internal headphone jack is centrally mounted, so there’s a degree of awkwardness in marrying the plugs. Once it’s in, though, it feels quite secure and shows no sign of working itself loose.

The most important part of any waterproof case is the seal and this has a familiar self-tightening sliding design. You need to pull both switches outwards to open the seal. Unfortunately, the seal lacks a safety interlock of any kind and the pressure needed to release it is worryingly light. I would definitely be concerned about accidentally opening the unit while mucking about in a swimming pool or snorkelling in the surf. The seal proved effective in basic waterproofing, although a very small amount of water did find it way into the seal. This could leak into the case when you subsequently open the seal. 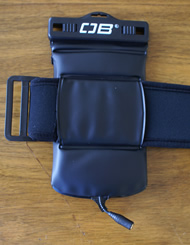 The case comes with a small eyelet for a lanyard (supplied) and a large Velcro armband. This is tougher and more comfortable than the standard Apple armband, for example, and closes very firmly – a quality piece of kit. Assuming you want to read your iPod’s display and have the headphone jack upward, that means the seal faces downward – another potential concern if the seal were to accidentally open while you’re running.

The good news is that the Apple clickwheel works perfectly well through the plastic window, and the screen is clearly visible – you could easily watch downloaded video clips while bobbing on a lilo. Sound quality is not noticeably affected by the intervening jacks. Even with an 80Gb iPod (the heaviest Apple currently available) inside, the case floats in fresh water.

The OverBoard has clearly had some thought go into it. It’s well padded, easy to use the player inside and has an excellent armband. But the seal system is neither secure enough nor convincingly impenetrable for the most active users. The warning on the package that ‘contents should be insured separately’ seems like very sensible advice.

A good solution for casual use near snow, rain, water and dust, then, but athletes and divers should definitely spend a little more on protection.