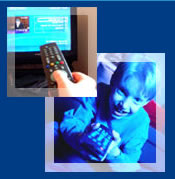 The BBC has announced it is running a push-VoD trial in the UK.

Around 300 people, based in and around London, are taking part in the three month trial.

The trialists will get a box with a large hard drive in it, storing up to 100 hours of TV content from the previous seven days. Half of the hours will be automatically recorded by the device, with the rest available for the trialist to select. The content will arrive through a normal TV aerial, via DTT (Digital Terrestrial Television) as used by Freeview. Clearly in the future, content would be able to be added via broadband.

Rahul Chakkara, Controller of BBCi said: “As we move further into an on-demand world, where viewers are looking for more opportunities to take control of their viewing schedules, it is imperative that the BBC is at the forefront of exploring new technologies to meet their needs.

Just hearing that, you’d be fully entitled to excuse them that they’re grandly calling it Push-VoD, when in reality it’s a PVR. It appears that there’s more to it than that.

Push-PVR underplays it
The BBC is working with Bristol based UK company Cabot Communications, who will be providing expertise in MHEG (Multimedia and Hypermedia information coding Expert Group).

We think the story on this is actually about the BBC being able to trickle content to these boxes over the air (OTA), primarily overnight.

Translated to English, this means MHEG programs, elaborate graphics, sound files and even additional video can be delivered ready to be used for the interactivity – when the viewer presses the red-button.

With this level of additional assets the interactivity becomes very rich – far more like a broadband computer experience than people are used to with their TVs currently.

The potential for this is huge – both with general interactivity and specifically with games or educational material.

Cabot Communications have supplied the software and they have achieved all of this cleverness by extending MHEG, enabling the program to access the assets locally. It’s the first time this has been done..

The boxes for the trial have been provided by Vestel, the Turkish manufacturer.

Possible impact of the news
Those at BT Vision are probably fretting considerably as this news is likely to put off some people who are targets for the V-box. BT Vision’s approach is to pursue people who are interested in Freeview (the UK FTA DTT service) that going for the V-box will given them all of Freeviews content and functions, but will enhance it by offering a PVR and other content available over a broadband connection.

Many of those in the commercial sector will be shouting “Foul,” at the suggestion that they might be proposing their own device to receive content. The common approach is to say that the BBC should stick with what they’re known for – making great TV and radio programmes, and not spreading their attention to areas where the commercial sector already is.

We think although interesting, people shouldn’t get too excited about this. The BBC has often dangled interesting technology in front of people, only then to have them spoken about but for them to not emerge – see the Memorandum of Understanding with Microsoft.