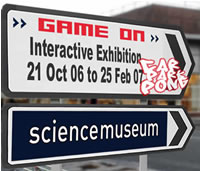 The Nintendo Wii and Sony’s Playstation3 (PS3) will be available for play at the Game On exhibition at the Science Museum from Wednesday. Expect queues.

Don’t bother flying to the USA and queueing for three days to be the first to get your PS3, or splashing out £1,000 to buy one from eBay, that may, or may not actually turn up. If you live in the UK, it couldn’t be simpler – just get yourself down there when the doors open at 11am to get your hands on the first publicly available PS3 in the UK and the attention-attracting Wii.

The PS3 is scheduled for launch in March in the UK, while it’s emerging that only around 150,000 were shipped at the recent US launch. The Wii’s UK launch is much closer – 8th December, having had its US launch already. 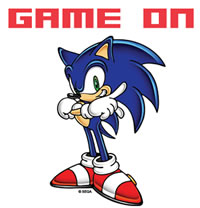 The two new boys will be alongside the current exhibition, which cover the history of video games, starting back in the early 1960’s.

We went to the first Game On exhibition when it was at the Barbican in 2002 and were highly impressed with it. Not just the number of games and platforms covered, but the sheer depth of the knowledge on show.

We’ve spoken to the organisers and hear that quite a few of the exhibits have changed from the early days, including items that have been picked up over the years as the show has travelled over the world.

When you get bored of all the new stuff, by way of a stark contrast, you’ll be able to play the world’s first computer game, Spacewar!, from 1962 as well.