Arriving just eight months after the announcement of the upmarket D200, Nikon’s new D80 builds on the success of 2004’s D70, offering a slew of enhancements, a larger LCD and an inevitable upping of the pixel count.

The D80 increases the pixel count by 67% on its predecessor to 10.2 megapixels, and manages to shrink the package down to more or less the size of the entry level D50 dSLR.

Although the reduction in size is welcome, it’s still quite a hefty beast compared to models from Olympus and Pentax, although there’s not a great deal of difference in bulk between rival cameras from Sony and Canon.

The D80 manages to borrow some of the high end features of the some of the company’s high-end cameras, inheriting the processing engine of the Nikon D2X, and the Nikon D200’s Multi CAM 1000 AF system, CCD, LCD and viewfinder.

Clearly this mix’n’match approach makes sense for cost-aware Nikon, with interchangeable components helping to keep the prices down in a hugely competitive market, although the differences in build quality between the D80 and its big brother are clearly marked.

SD card
Users upgrading from the D70 may be mightily unchuffed to discover that Nikon has switched from Compact Flash to SD memory cards.

Capable of supporting the new Secure Digital High Capacity (SDHC) cards, this opens up potential capacities of up to 32GB and may help tempt users of compact cameras already using SD cards.

At the back of the camera we could see useful improvements to the button layout, and the 2.5″ LCD screen seemed positively enormous compared to the squinty 2″ screen on the D70. 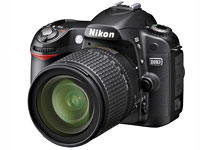 Interface upgrades
The on-screen user interface had also been considerably spruced up, using the same high resolution and anti-aliased fonts from the D200. The new image review zoom in/out controls improve massively on the fiddly controls of the D70.

The bigger, brighter 0.94X magnification viewfinder was equally well received; we loved the addition of the light switch to the on/off control and quickly felt right at home with the tweaked top plate layout.

ISO range has been improved to cover 100ISO right up to ISO3200 (with boost) with 0.3EV steps, backed by the same three custom NR (Noise Reduction) settings from the Nikon D200.

There’s also a host of new customisation options (a total of 32 custom functions) letting photographers set up the D80 to their needs.

Flash
Less good is the flash sync speed dropping down to 1/200, although we’re doubtful that most users will ever notice the difference.

The electronic-release pop-up flash raises automatically in appropriate Auto modes or can be triggered manually by pressing the flash button.

The flash offers a guide number of 13 (m at ISO 100) and can also act as a commander in a wireless flash setup.

Speed
We found the D80 to be a very, very fast performer, with a near-instantaneous start-up and barely measurable shutter lag ensuring we didn’t miss a shot.

With an eye to point’n’shooters, new Black & White modes offering additional Sepia and Cyanotype options have been included, along with the usual Program, Aperture priority, Shutter priority, Manual, Auto and six programmed modes (including a new Night Landscape mode).

Although it generally worked well in our tests, a couple of times it threw up some clearly over-exposed scenes, which suggests that it’s not quite as user-friendly as Nikon suggest (in fact, this issue has been a hot topic on the dpreview forums with photographer Ken Rockwell declaring his D80 meter to be “the worst of any Nikon I’ve used in 20 years.”)

Although a deft bit of dialling down with the exposure compensation button can fix this easily enough, it does seem markedly different to how the D70 metered and that’s something users will have to get used to.

Conclusion
Overall, we were very impressed with the D80. It feels like a significant step up from the D70, punching above its weight in features, usability and performance. 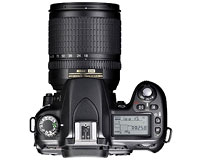 The camera is easy to use, feels right in the hand with all the main controls falling easily to hand, and looks like it could take the occasional knock.

The improved viewfinder provides a big, bright view with the larger LCD screen and updated interface adding to the feeling that this is a real ‘photographers camera.’

Minor metering issues aside, images were crisp, clean and vibrant, with an improved high ISO performance making the camera a versatile performer in all conditions.

Although it’s priced ahead of its main rivals, the Canon EOS 400D and Sony Alpha, we feel that the D80 is well worth the extra outlay and offers the best all-rounder 10 megapixel DSLR of the bunch to date. Highly recommended.