UK uber-regulator, Ofcom has finally got itself sorted out and is to allow the use of low-powered FM transmitters in the UK from 8 December.

These are commonly used by owners of portable music players to transmit their chosen musical ditties from the player to better amplification and speakers via a radio/tuner. You know those ‘young people’ often use them in their cars to wake up the neighbourhoods, with their ‘repetitive beats.’

It’s been a bit of a mystery as to why Ofcom hasn’t acted on this sooner given the number of people that use these devices and Ofcom’s desire to stay on top of technologies under their remit. Ofcom has allowed devices up to 59 nanoWatts, which doesn’t sound like a lot does it? In practical terms it means they’ll be able transmit over around 5 metres in clear space.

Devices that will benefit from this change will be iTrip by Griffin (probably the best known device) and devices like the RocketFM. 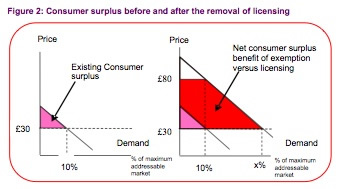 Ofcom’s research estimates that there are currently 875,000 of these in the UK – even with them being illegal (based on 10% of mp3 player owners having bought them).

We think this is a great thing, whose uses will only grow as people try to move music around their houses.

Expect these devices to be hitting the top of peoples xmas lists when the news hits the public. It’s going to be a good xmas for those involved in making or selling them.

Talk about the opposite ends of technology – Ofcom also tell us that these changes will free the-now 20,000 users of CB-radio from needing to apply for licenses to operate them. 10-4 big buddy.