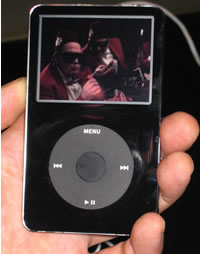 Apple have just announced that they have signed deals with six major airlines, offering the first seamless integration between iPod and the planes in-flight entertainment systems.

Starting mid 2007, Air France, Continental, Delta, Emirates, KLM and United passengers will be able to charge their iPod while in the air, but more interestingly be able to watch the video held on their iPods on the seat-back monitor.

Beyond that, Panasonic Avionics Corporation is working with Apple to build it into other airlines

Comment
This is a great deal for Apple. Not only do they fix the problem with people running their batteries down during a flight, and possibly not having any juice when they land and continue their journey, but as they’ve got first mover advantage on this. It’s going to be significantly harder for another player to have their kit integrated in to the planes. There’s only so many connectors that the airlines can make available.

We asked Apple if it was an exclusive deal, thereby blocking out other media players, but at the time of going to press we hadn’t heard back.

For the passenger, surely the wise move would be just to provide a USB port and allow people to plug whichever device they have with them, and have the in-flight system decode the media file and play them back. Thereby not being locked to a make of player.

The only down side we can see for this is for the airlines, as they won’t be making money out of charging for films.