The US is responsible for a fifth of the world’s spam, according to security firm Sophos.

Based on their figures for Q3 2006, the US was responsible for a whopping 21.6 percent of relayed spam, making it the worst country on the planet for originating spam.

Us Brits can give ourselves a little pat on the back, as we’ve managed to reduce our spam output enough to drop out of the top ten, into 13th position.

Stratio is a pain in the arsio
Sophos reckons that the reason for the boost in the US’s spamming activities could be down to the emergence of over 300 strains of the Stratio worm.

This pesky bleeder, also known as Stration or Warezov, spreads via email using a variety of disguises, including a cheeky one that warns the victim that their PC has already been infected by a worm.

Of course, if the recipient is daft enough to download the enclosed attachment, they will indeed by infected by a worm. 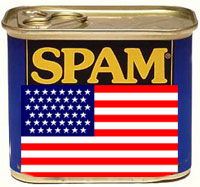 Most unsolicited emails are churned out by zombie PCs. These don’t walk towards you, arms outstretched and making funny groaning noises, but are computers that have been silently infected with Trojans, worms and viruses that turn your lovely PC into a spam-spewing beast.

“In the past hackers were very reliant on operating system vulnerabilities to convert an innocent computer into a zombie – now they are turning back to malware to trick users into running their malicious code, and opening the backdoor to hackers,” said Carole Theriault, senior security consultant at Sophos.

Spammers get sneaky
Sophos has also identified new scams being dreamt up by creative spammers, including a mail asking for email addresses for spam purposes, and another that encourages users to visit a video tribute website – but you’ll only get to see the full video once the user has input their email address (if the video even exists, of course).

“Integrated anti-malware and anti-spam protection is getting the better of illegal spam peddlers – forcing them to get more creative and crooked. However, if people are playing their security cards right, the spammers’ efforts will still be in vain,” continued Theriault.