Check Point, the makers of the top-notch internet security software ZoneAlarm, have announced that they’ll be moving into the hardware market with the release of a new, high-spec, wireless router.

Targeted specifically at home users, Check Point say that their decision to break into the hardware market was prompted by growing concerns over security holes in home networks and more sophisticated attacks from hackers that managed to bypass gateway and PC-based security measure.

“A wireless network creates great convenience, but the technology that allows for that convenience also provides only the most rudimentary security features,” said Laura Yecies, general manager of Check Point’s consumer and small business division.

“By combining software like the ZoneAlarm Internet Security Suite with a secure gateway, consumers can actually have several layers of defence,” she added. 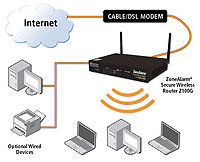 The web-based management system will let users control peer-to-peer and instant-message communications and customise their interface with preset security rules.