Now there’s been much talk of the death of traditional linear TV and it appears that the demise of the traditional broadcasters in the UK is taking a little longer than some expected. Perhaps hidden behind the excitement of Google buying YouTube and the UK start of two further channels on the Freeview platform; Five US and Five Life is a channel that could be the harbinger of how TV channels in the future will launch.

So what is 18 Doughty Street? Well it’s both the name of a new Internet TV channel and the address where it’s produced. It’s target audience appears to be a group of right leaning Political Anoraks and the content is unfettered by the UK broadcasting regulator OFCOMs requirement for broadcasters to show political even-handedness across the left/right spectrum. To be fair it is upfront about it’s partiality, declaiming others for not coming quite so clean about what it sees as their undeclared biases.

One of the guiding lights and also taking presenting duties is Iain Dale, Ian is well known both for standing as an unsuccessful Conservative candidate at the last UK general election and as one of the bloggers who exposed details of Labour’s deputy leader John Prescott’s extra marital affairs on his blog.

The channel is starting with a four hour per night Monday to Thursday schedule, the programmes, once broadcast are available for download to the politically fixated. 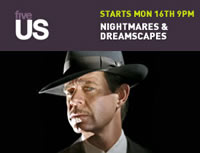 The relatively innocuous content is lodged somewhere between the fashionable haphazard Zeitgeist of UGC (User generated Content) and the bland professionalism of the big broadcasters, time will tell if there’s a hole there that this will fill.

It might be that this sort of channel will appeal to viewers who shy away from subscribing to video Podcasts via iTunes but it again exposes the need for a simple method of getting TV type content from the home PC to the traditional TV.

There’s no guarantee that future examples will be quite so innocuous and this new channel exposes the issues around how Europe’s TV without frontiers may need to be revised to include what is effectively TV delivered by the Internet.