Pesky phone thieves may get more than they bargained for if a new anti-theft system proves a hit with punters.

Launched in Britain today, the system is aimed at smartphone-toting business users who may need to carry around confidential information on their handsets.

The Remote XT software is loaded on to the smartphone, with the system storing personal info like phone numbers, text messages and e-mails on a secure remote server – so even if a phone is nicked, the user can get their data back later.

As soon as the owner realises that some light fingered Fagin has just picked their pocket, they can dial a 24-hour call centre, have it registered as stolen and let the screaming begin.

Panicking thieves can, of course, take out the battery to silence the racket, but as soon as they try to use it again, the noise starts up.

Moreover, the Remote XT software disables the handset itself, so even if a resourceful tea leaf removes the internal SIM card and tries fitting another, the phone’s still a dead duck. And a noisy one at that. 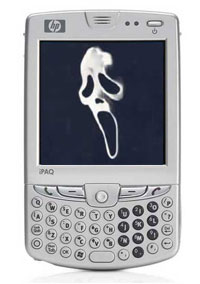 Mark Whiteman, managing director of Remote XT, said: “Theft-proof phones spell disaster for the huge criminal industry that has profited from mobile theft for too long”

“By making mobiles unusable to anyone but the rightful owner, the phones become worthless and we’ll see the market for stolen handsets stamped out once and for all,” he added.

We’d love to agree with the fella, but with the service costing upwards of £9.99 a month, we suspect that many will find it too pricey.

However, Remoter XT claim that their software will work on most phones and not just Windows based handsets.

Meanwhile, Palm Treo users concerned about keeping their data safe can use software like Butler and Warden to remotely lock and or delete the contents of their phone and memory card (although they’ll have to do the screaming themselves).