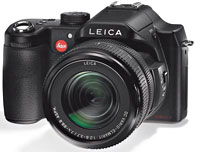 There’s been a flurry of interesting announcements from some of the photographic bigwigs leading up to the Photokina ‘World of Imaging’ Trade Show, which is held every two years at the Cologne Exhibition Centre, Germany.

The show runs from 26th September to 1st October, and we can expect further product announcements in the build up to the opening day.

As well as the fantastic Leica M8 camera we’ve already drooled and dribbled over, Leica also revealed three other cameras, all based on current Panasonic models.

Leica DIGILUX 3 dSLR
The DIGILUX 3 dSLR – which is essentially a Panasonic DMC-L1 – opts for the Four Thirds system instead of Leica’s own reflex lens mount, and comes with the innovative 7.5 megapixel LiveMOS sensor for real-time, live photo previewing.

All the cameras have had image processing adjustments as defined by Leica, and, of course, spot that lovely red badge that says to the world, “I have considerably more money than yow.”

New Canon cameras
Canon have also rocked up with a full trolley of new products, with the most interesting of the bunch being the long overdue upgrade to the Powershot G6 which was launched as long ago as August 2004.

The camera comes with a 2.5″ high-resolution LCD – sadly without a swivel-out feature – with wide viewing angle and anti-glare coating and 25 shooting modes including full manual control and 2 custom settings.

There’s also a hot shoe, face detection software and ISO settings up to 1600, but keen photographers will be disappointed to see that there’s no RAW mode. Price is set around $550. 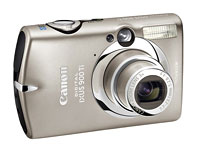 Canon PowerShot SD40
Finishing off the rollcall of new Canon products, is PowerShot SD40 Digital ELPH (Ixus i7), an upgrade to their popular SD30.

The pocket sized compact comes with the new Digic III processor, ISO 1600, face detection and a 7.2 megapixel CCD and – look out fashionistas! – will be offered in a range of four ‘chic’ new colours.

Olympus E-400
Olympus’s new ten megapixel compact digital SLR looks to be a bit of a beaut to our eyes, offering the Supersonic Wave Filter for dust reduction, a 2.5″ LCD monitor, three frames per second continuous shooting and an improved interface.

Coming with a 14-42 mm F3.5-F5.6 kit lens, the dSLR uses the Four Thirds Standard and offers both CompactFlash and xD-Picture Cards storage.

There’s a veritable flotilla of scene modes onboard, as well as a host of advanced features for enthusiasts.

Bizarrely, Olympus have decided not to release this camera in the States.

ISO sensitivity can be set from 100 to ISO 1600, with continuous shooting at approximately three images per second.