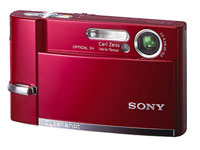 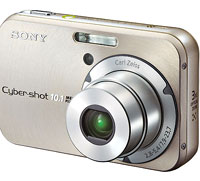 Sony DSC-N2
The DSC-N2 follows on from the DSC-N1 and comes with the same 3.0″ touch-screen LCD and Carl Zeiss Vario Tessar 3x optical zoom lens, finished off in a natty ‘champagne gold’ finish.

The DSC-N2 comes with a built-in slide show feature, allowing you to wow your chums with your holiday snaps forever.

With every picture taken, the camera creates a secondary, VGA resolution image which is stored in a dedicated section of the camera’s internal memory.

These images can then be played back as “in-camera slide shows,” complete with (guffaw) ‘creative’ transition effects like pans, wipes and fades, accompanied by the user’s own soundtrack of “Uno paloma blanca,” if they so desire (Please….no…spare us!)

“With digital photography, the social interaction that happens when people share their pictures has become as important as making great photographs,” insisted Phil Lubell, director of marketing for digital still cameras and photo printers at Sony Electronics.