We’ve been keeping our eyes on Background on how it all works).

Today it’s been announced that two radio stations in the UK, Virgin Radio in London, and GWR FM in Bristol will be launching support for the service, with Virgin Radio leading this week.

There are three partners involved, HP supplying the backend, O2 carrying the data, and the radio stations providing the content.

James Parton, Head of Music, TV and Radio products at O2 comments, “The in-built radios in many of our handsets have always been popular with people who are always on the move, but now visual radio lets you really interact whether that is with the actual DJ themselves or downloading ringtones of your favourite songs over the O2 network.”

In covering the main reason that Virgin Radio are interested in it, James Cridland, Director of Digital Media at Virgin Radio, said “It can also give advertisers a more dynamic platform to communicate their messages.”

As we’ve covered many times before, one of the sticking points is whether the already-burdened mobile subscriber will be prepared to pay extra money to use these services. 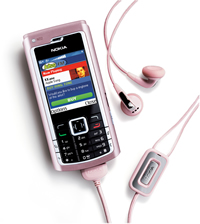 O2 have announced the usage charges of Visual Radio. At O2’s standard data rates of £3.00 per Mb dependent on tariff or O2 Browse and Download bolt-ons from £3 for 2mb and £5 for 4mb.

Although the amount of data that will be transferred won’t be that considerable, with small graphics being the most hefty, it will still cost people money to listen to the radio – something they’re not used to.

People may also legitimately ask why they should pay to help enhance people advertising to them.

Earlier this week Nokia bought Loudeye, the company that they partnered with to process their music.