A visual communications company, All New Video, have announced a deal with BBC to enable feedback and input into TV programmes from viewers, video calling from 3G phones, Web cams and ISDN. On the voice side, it will add VoIP to its inbound voice channels.

It will open up and encourage the input of BBC viewers into news television programmes, widening the chances for user-generated content. The first show will be ‘Have Your Say’ which is aired on BBC World and BBC News 24, which they hope will before the end of the month.

We think this is a really exciting idea, with the live element being the real revolution. We spoke to David Hogben, General Manager, to get the low down.

Webcam to Live Broadcast
During live shows, the producer will be able to ask viewers to join in with the programme, by connecting with their 3G mobiles (unlikely and expensive for the caller), or far more interestingly, their Webcams.

To get to add their two penny worth, prospective video chatters will go to the BBC News Web site and download an ActiveX control (sorry Windows only currently), which will pick up their Webcam and/or microphone, letting them connect.

As the Application can be downloaded by anyone, input can come from anywhere worldwide. 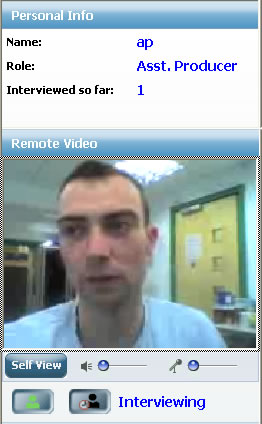 The system give the assistant producer the ability to carry out a video chat with the viewer letting them ascertain their suitability of the show – frankly, filter out those not relevant. Each person can also be ranked and some notes made about them.

When the assistant producer thinks they’ve got the best of the bunch, they are passed in to a ‘waiting room’ where the producer can also chat with them, and then they decide if it’s time to put them live into the broadcast. As the 3G video is low res and the Webcam quality variable, it’s likely that video feeds will only be broadcast at quarter screen resolution for the time being.

The whole process runs through a Web-browser on All New Video’s servers, until the broadcast, when a server at the BBC is connected with, feeding the video and audio out through an SDI interface.

Video comments
Those old enough will remember UK broadcaster, Channel 4, used to have ‘feedback booths’ in a couple of UK cities where viewers were able to go into a darkened box and share their views with the UK audience. 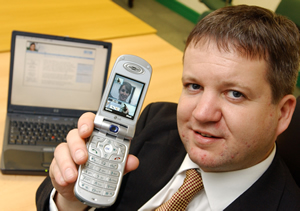 The new BBC system will let people do the same from the safety of their own bedrooms, where they’ll be able to leave their five minutes of video wisdom in a video mail system.

Background on All New Video
All New Video started in 2002 with the advent of 3G as they thought it would address a lot of the problems the founder, David Atkins, had encountered in their previous video conferencing business.

Their first big business win was a contact with Orange to supply the technology for their video answering service. Any time you can’t get through to someone with a video call on a 3G or 2.5G phone, you’re connected to the All New Video kit, where you can leave up to a 30 second message which is then delivered via MMS.

As we’ve been hearing from Vodafone recently, video calling isn’t being embraced by the 3G owning public, neither, more widely, is 3G. This lead to a rethink for them and a switch to including Webcams and other Internet technologies such as VoIP to be included.