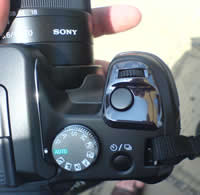 We had our hands on the Sony Alpha A100 last week, Sony’s first step into the Digital SLR (dSLR) market.

We’ve known for a while that Sony and Konika/Minolta would be producing a dSLR, following Sony’s purchase of the traditional SLR company. The A100 is the first product of the deal.

Sony tell us that they see the market for dSLR’s growing by 30% over the next year, which is lucky as the compact digital market appears to be stagnating. They’ve got grand plans for this market, with their stated ambition to be ‘challenging for the top position’ by 2008.

The key message from Sony with the whole of the Alpha range is “We want to make you a better photographer.” Highly appealing to those who may be scared off by crossing over from a compact camera to the SLR world. 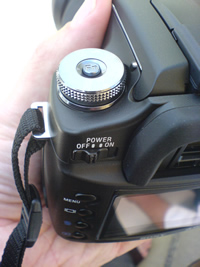 What’s Hot
Sony have brought their own CCD technology to the party, giving a 10Mpx image, but it’s not full-frame (the sensor isn’t the size of a full 35mm film frame). They’ve combined this new CCD with anti-shake features seen on the Konica Minolta Dynax/Maxxum 5D, which stabilises the sensor instead of the lens element. Sony have labeled this Super SteadyShot.

The new Bionz image processor also adds a lot like the Dynamic Range Optimiser, which balances light levels between subject and background when taking photos into the light from a dark place.

A feature brought over from the Konika/Minolta includes EyeStart. Two sensors just below the viewfinder detects when the camera is brought to the eye and prepare the camera to start shooting.

As with previous cameras, Sony are working with Carl ZeissThe SLR lenses from Konika/Minolta will fit the A100, so the brave might be able to pick up a bargain or two buying them second-hand, quite likely when there have been 16 million of them sold worldwide. 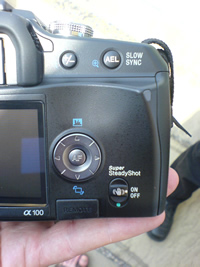 First impressions
These are all based on the brief time we had with it. We plan to do a more in-depth review in a few weeks time.

First impressions are that of a quality camera. The battery grip is solid and comfortable, giving the impression that handling it over an extended period wouldn’t be tiresome.

The materials used vary over the body depending on the function and need. It’s with interest that we saw that the material around the shutter button was highly reflective providing a good feel, and we assume, reducing the risk of the area wearing excessively. When taking photos, small things like the solid sound that the shutter makes after you press the shutter button, as it raises out of the way to expose the CCD, also reassures you that it’s quality.

On the back of the body is a 2.5″ Clear Photo LCD which provides a very wide viewing angle, useful for showing off your recently taken shots. We can also confirm that Sony’s efforts to make the screen viewable in sunlight have been successful.

Sony claim that all of the commonly used functions are placed on dials, close to hand on the body, rather than burying it within on-screen menus.

Showing that the camera is a transition between Konika/Minolta and Sony, the storage on the camera is the size of compact flash. Not wanting to appear lacking in their support for their own format, Sony provide a converter to support Memory Stick. The lenses that come with it, especially when the two pack is considered, give good value, but as is so often the case with bundled lenses, we wonder if these will be cast aside after a short time. Although appearing to be competent, small differences from after-market lenses like the mountings being plastic, not metal, give pointers to the build quality.

Our only reservation is over the quality of the photos taken. Initially they looked great, but when zoomed to full screen we were alarmed to see the pixilation of the image. We’re not sure if this was down to the camera we used being on some strange settings or if the camera has a problem. We’ll know more when we get our hands on it for a longer period. Pricing and availability
The Alpha A100 is keenly priced

Sony are quoting that the whole kit and caboodle will be available in July 2006.