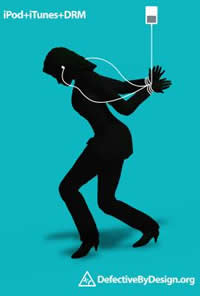 Saturday saw anti-DRM protests at eight Apple stores across the USA organised by DefectiveByDesign, who are running an on-going ‘Campaign to Eliminate DRM.’

The protests took place between 10am and noon, where those involved got dressed up in brightly coloured HazMat (hazardous material) suits, stood outside the shops carrying placards and handing out leaflets.

They argue that it is unreasonable, among other things, that purchasers of music tracks on iTunes are not able to resell their music once they have finished with it – a right they previously had when they used to buy physical media.

Where as to most people DRM stands for Digital Rights Management, Defective By Design label it ‘Digital Restrictions Management.’ Their particular beef with Apple is that, because of the use of DRM, Apple are locking-in people who buy music tracks at the iTunes store.

It’s the first time we’ve heard to a flashmob being used for anything approaching useful.

Being online-types there’s loads of media to look at whether is be photos and a number of videos from Chicago and San Francisco. 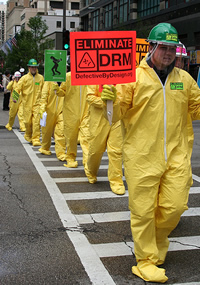