“Would you like a single piece of sheet music that contains all your favourite pieces, and never needs to be turned over?”

I work with e-paper – a lot. Of course, there is none on the market yet, apart from something pretty primitive from Sony and something slightly less primitive from iRex; but I spend my time playing with the products of 2008 – and this week, I got to see some of them “in the flesh” as part of a design competition at the London Central Saint Martins College of Art and Design. And it was astonishing to me just how many bright ideas are buried in the simple concept of an e-Page.

An e-Page is related to the concept of an e-book reader in the same way that an iPod is related to a CD player. Each is a use of e-paper, designed as part of an entire ecosphere; with authors, distributors, performers and hardware makers and customers all considered, fitted into the big picture, and happy with innovative leaps into the wonderful future.

The universal piece of music wasn’t even the first prize winner in this competition. It was a contest sponsored by one of the world’s leading e-paper technology designers, Plastic Logic, which has demonstrated a flexible sheet of A5 “paper” that has the contrast and readability of real paper, the flexibility of soft cardboard, and the power consumption of a watch. And the prize went to something that is, in the end, “just a book.”

I can’t give all the secrets of the contest away; Plastic Logic is planning a press announcement for later this week, where all the short-listed entries will be showcased. My job was to be one of the judges of the competition (in my role as Founder of AFAICS Research along with my partner, Nick Hampshire, and Tony Chambers, Creative Director of Wallpaper – as well as a senior executive from Plastic Logic, and technology evangelist and financier, Herman Hauser of Amadeus Capital. They were there to make sure the technology was of value in the market, of course.

But it was a genuine eye-opener for me. 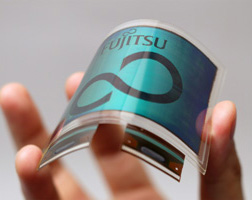 When you invent a new technology, you always start off by producing something which you know has a market already, and which you think you can do better.

For example, if you wander around the woollen mills of the early industrial revolution, you’ll see machinery which faithfully replicates the actions and movements of the people who wound bobbins or spun thread. I remember seeing one room full of spindles that “walked across the room” the way a human would have done, winding up wool, then walked back to the wall pulling out a few new feet of thread, before winding up again.

Similarly, the first e-paper concepts take things which are made of paper, and where it’s more robust to use e-paper. One concept that was actually my favourite, was a replacement for tags for patients. In a sense, you could say “It gets rid of the printer” and at a simple level, that’s exactly what it does. But it does far more; because the data is held in digital form, it’s machine readable as well as machine writeable, and the whole thing becomes part of a holistic system.

After the afternoon’s judging, I went home, with my mind buzzing. We sat down and had an impromptu Board Meeting of AFAICS Research, and hopefully, over the next few weeks, I’ll be able to pass on some of our ideas. But the nub of it is: “We really need to start planning the e-Page industry!” because if we don’t, we’re going to end up with a hundred pieces of a jig-saw puzzle, none of which make up the same picture.