The “Old Media” is still struggling with the idea of the Internet – and discovering that embarrassing mistakes can’t be swept under the carpet. On the Internet, insults are permanent, the Guardian has discovered.

And can it be that someone senior on the London Evening Standard has a soft spot for Mark Steyn? There has to be a reason why the paper’s Web site has unaccountably failed to repeat a story which reflected rather little credit on Steyn – or on the editorial production process at a rival newspaper, the Guardian.

The story that should have been printed was one about the blog of “internet cannibal” Kevin Underwood. It seems that Mr Underwood was a man in terminal spiritual melt-down, because not only did he eat people, but he also wanted to buy a copy of “The Vagina Monologues” from Amazon.

The story ran in the Guardian. It is still there, but if you read it, you’ll be puzzled indeed by a scathing attack on the story posted by Scott Burgess in his “meeja critic” blog. Burgess not only hates the way Brown wrote, but expresses himself baffled by a “laughable” error by Andrew Brown:

To quote Burgess: “Hilariously, Mr. Brown takes special care to note (brackets in original) that: ‘Underwood also kept a wish list on Amazon, which has now disappeared, but is reported to have contained The [Mark Steyn] Monologues’ – the [Mark Steyn] Monologues? What the heck is that?! Has Mr. Steyn been doing some work of which I’ve been unaware?”

Read the story as it is today on the Guardian web site; you’ll see that Burgess is quite right to point out that the book in question was, as the cannibal admits, “The Vagina Monologues.”

“How could Mr. Brown possibly have made such a laughable error?” stormed Burgess, asking “Is it simply due to his own sloppiness, or is there a macro installed on all Guardian computers that changes ‘Vagina’ into ‘Mark Steyn’, and vice versa? Both seem equally likely.”

The explanation is no secret. Tuesday, a week after the error, the Guardian printed a correction, both online and in the paper version. It tersely said: “The Vagina Monologues, which we intended to refer to in eBay, Manga and murder, page 2, G2, April 19, became, bizarrely, The [Mark Steyn] Monologues.”

How did it happen? The writer, Andrew Brown, explains that he sent the article on Underwood to the Guardian via email. Brown himself reports succinctly enough on what happened then:

“It got held up there by the spam filters — this seems to happen to my copy quite often — so I had to send another version with all the naughty words replaced by square-bracketed euphemisms. They all seemed clear enough to me, and all but one was obviously clear to the sub who did, however, let through the phrase “a copy of the [Mark Steyn] monologues”. 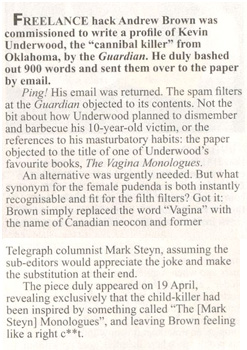 No insult, obviously, was intended to the eminent writer, Steyn. But it looks like some people have got cold feet. Today’s London Evening Standard, early editions, reported that the Guardian had not covered itself with glory: “Great copytaking of our time,” it crowed in its Wednesday Media section; “Yesterday’s Guardian included the correction…” and quoted the correction, as given above, in full.

Two hours later, the “West End Final” edition of the Standard appeared. You can search it all you like, but you won’t find a reference to Steyn, nor to vaginas.

We’ll leave it to Private Eye to summarise it: see illustration – alas, a story which the satirical fortnightly had not managed to upload to its online edition by press time. But you can buy a copy at any London newsagent… And if, at the end of that, you’re still puzzled, you might like to read today’s Daily Mirror, on all the words beginning with the letter “C” which might apply to Tory Party leader, David Cameron.

And if you still don’t get it, you probably cant.