The dome-headed boffins at Nokia have triumphantly put their multiple pens back in their white coat pockets as the new Nokia N73 and N93 phones roll out on the product slipway.

There’s also a new Xpress Share client which is designed to make it easy for mobile snappers to blast off their masterpieces via MMS or email, or upload images to Flickr accounts.

Being Brits, we refuse to describe mobiles as having a ‘candybar’ form factor, so how about we call the N73, ‘Amazin’ Raisin Bar’ shaped?

Well, we would say Mars Bar shaped, but then some of you with smutty minds might start giggling at the back, so we’ll settle for ‘Chunky Aero Bar’ instead.

Now that that’s settled, we can tell you that the Chunky Aero Bar-shaped N73 is designed to replace the popular N70 model and offers Quadband GSM/EDGE connectivity, with some models also including include 2100 MHz UMTS.

Unleashed from behind its spring-assisted cover, there’s an auto-focus 3.2 megapixel camera boasting Carl Zeiss optics, with 42 MB built-in memory and a MiniSD slot for additional storage.

Nokia N93. Like a lardy Curly Wurly. Sort of.
Sticking with our ill-thought out confectionary theme a while longer, we reckon that if the N73 is an Aero Bar, then the N93 must be like a bendy Curly Wurly with its flexible hingey thingy. 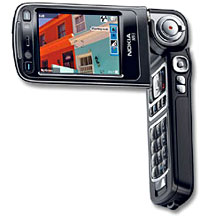 The onboard music player can keep you rocking to MP3, AAC, AAC+ and WMA, and there’s a FM radio with visual radio for some Terry Wogan on the move.

Sadly, those looking to see the famous wig wobbling about on TV will be disappointed to learn that the there’s no DVB-H tuner onboard.

Nokia waves around the wedge. Celebs flock for a slice.
Nokia have pushed the boat out on promoting these new phones, somehow persuading actor/director Gary Oldman to shoot a short film using the N93 as part of their “pioneering new mobile video initiative”, the Nokia Nseries Studio.

Apparently, Oldman has become part of an “international cast of creative visionaries who are shooting mobile movies for the Nokia Nseries,” with the results being posted up at www.nokia.com/nseries/studio

Come the summer, Nokia are going to open up the site so mere mortals craving to achieve ‘creative visionary’ status can slap up their own movies.