After being bowled over by Ricoh’s GR Digital camera (so good we went out and bought the thing), we were keen to review their new consumer-based point’n’shooter, the Caplio R4.

Getting to grips with the R4
Finished in an attractive black finish with a silver band and lens surround, the controls of the R4 are well laid out, with a gently contoured grip on the right hand side making it easier to keep a hold of the diminutive snapper. 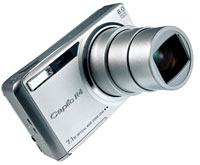 A large and bright 2.5″ LCD 253k pixels screen dominates the rear of the camera, with a familiar four way controller/OK button supplemented by a zoom rocker switch.

A row of five buttons next to the LCD screen let users select voice/movie or still mode, playback, adjust, delete/self-timer and display options.

On the top plate there’s just the power switch, the large shutter release and a recessed button to turn the image stabilisation on/off. 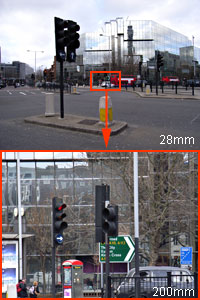 That mighty lens
There’s no other way of saying it: when it comes to lenses, the Ricoh has got a whopper.

Starting at a pleasingly wide 28mm (perfect for landscapes) the zoom goes all the way up to a privacy-invading 200mm with the Double Retracting Lens System miraculously extending an elephantine protuberance out of the 26mm thin body.

Although it’s not the fastest lens in town (F3.3-4.8), the images were pretty sharp, although the whirring and grinding of the zoom and focus mechanism might not make this a suitable camera for snapping candids in a church.

The macro performance was particularly impressive, focussing down to an astonishing 1cm – we particularly liked being able to manually select the focus area by moving a cursor across the screen with the four way controller.

Although we’re not fans of cameras offering mile-long lists of presets covering every conceivable exposure option known to man, we fancy that Ricoh could have included a few more for new users.

In line with its point’n’shoot aspirations, there’s no manual controls to be found, although the ‘adjust’ button lets users quickly tweak white balance, exposure compensation and ISO ratings.

Twisting trapezoids
A curious ‘skew correction mode’ feature selectable through the scene mode menu automatically detects trapezoids in images and corrects the perspective so the object appears as if they were shot ‘head on’.

Although you could easily do this in Photoshop, it’s a fun feature and handy when you’re photographing things like whiteboards, documents and magazines.

There’s also the option to display an onscreen histogram, but we reckon that’s more likely to hinder than help the average snapper as they’re not the easiest of things to understand.

Using the camera
Generally, we were impressed with the performance of the Ricoh, which was responsive to the touch and fast in operation throughout our tests.

The camera’s interface was easy to understand and we rarely found ourselves getting lost in sub-menus.

Quick to start up (just over a second), the Ricoh proved to be a speedy performer with fast focusing and a near instantaneous shutter response guaranteeing that we got the shot.

Trying to take a fast sequence of shots in normal shooting mode made us a little too familiar with the ‘writing to card’ warning which appeared after just two photos, but in ‘continuous shooting’ mode the Ricoh rattled off five shots in rapid succession (we’re not convinced that the ability to fire off shots paparazzi-style is that important to the target audience anyway).

Like its big brother, the Ricoh GR, the G4 includes manual focus options – a welcome addition at this price range.

This lets users manually set the focus distance or use the preset ‘snap’ or ‘infinity’ options (great for parties and landscapes respectively).

Shaking all over
At the 200mm end of the zoom range, some kind of image stablisation is essential in all but the sunniest of climes, and it’s good to see Ricoh’s engineers squeezing in this feature into such a compact camera.

The R4’s vibration correction system – which moves the CCD in the opposite direction to counterbalance camera shake – proved to be pretty effective in use, although the recessed on/off control was needlessly awkward to activate. 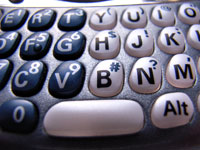 Considering the price range and feature set, we were also pleased with the picture quality – exposures were generally spot on and focusing was consistently good throughout.

Good for noise, bad for banding
Examining photos onscreen, we did notice some visible banding across just one or two images – usually in high contrast scenes. This rather blotted Ricoh’s copybook, with one photo taken of the Telecom Tower in London against a cloudy white sky bordering on unusable.

Noise levels were well under control at 64 -100 ISO, and still fairly reasonable up to 400 ISO.

By 800 ISO we were entering arctic snowstorm territory, but the results were still easily usable for 6″ x 4″ prints (after a bit of cleaning up with noise-reduction programs like Noise Ninja).

We didn’t see much in the way of pesky purple fringing (certainly far less than the Fuji F10/F11) and we were pleased with the lens performance overall.

Despite the big LCD screen and onboard image stabilisation, battery life was more than ample, and we were still powering on after taking over 250 photos.

Conclusion
The mid-range digital compact market is already saturated with some heavyweight contenders, but we feel the Ricoh’s compelling feature set, image stabilisation and enormous lens makes it a camera worthy of anyone’s shortlist.

Although we did have one or two problems with banding, we were won over by the R4’s speedy operation, easy-to-understand controls and comfortable handling.

Most of all, we loved having a proper wideangle zoom, with the 28mm setting adding real versatility to the camera – now you won’t have to herd your friends together into impossibly tight spaces when taking group shots.