Spurred on by the huge rise of original content being created for computers and mobile devices, The National Academy of Television Arts & Sciences has decided to officially recognise the growing medium.

Despite the mile-long name, the rules are simple – shows entered for the awards must not appear on television/cinema first.

After sifting through 74 entries – more than any other Emmy category – six broadband-specific shows have now been shortlisted for the Emmy Awards. 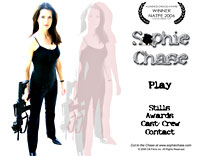 Donning our best party frock, we’re delighted to stand up to the podium and announce the nominees:

“24: Conspiracy,” by Fox Mobile Entertainment. A spin-off of the hugely popular “24” drama, the mobile version featured a different cast to the television series – no doubt because it works out cheaper that way.

“It’s Jerry Time!”, a quirky series of lo-tech animations documenting the life of a 40-something single guy.

The National Academy has stated that it expects the new category to be ongoing, and that it may eventually divide into subgenres – like comedy and drama – as the medium matures.

The winner is to be announced 22 April in New York.