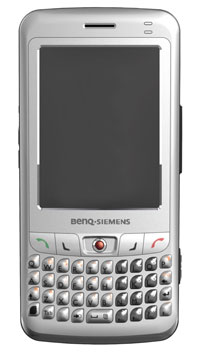 The phones, all going under the BenQ-Siemens brand, include the P51, a quad-band GSM/EDGE GSM/EDGE handset running on Windows Mobile 5.0.

Definitely not one for the pockets of the tight trouser brigade, the chunky P51 wedges in a Treo-like QWERTY keyboard, a large 2.8inch 240 x 320 pixels screen, an integrated SiRF Star III GPS module and a somewhat underwhelming 128MB of memory, along with an SD slot for expansion. 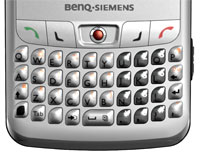 VoIP calls are made possible through the built in 802.11b/g Wi-Fi connectivity and pre-loaded Skype software.

The handset is due to be made available in Q3, with prices, networks and stockists to be confirmed. 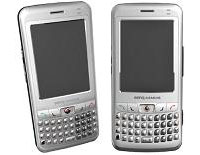 Also announced was the flagship EL71, a tri-band, 16.5mm thin slider phone with a metal casing in brushed aluminium finish. Designed for the “young professional,” the phone sports a 2-inch, 260,000-color QVGA display.

The C81 comes with a built-in multimedia player supporting MP3, AAC, AAC+ and AAC++ formats and an integrated 1.3-megapixel camera with 5x digital zoom. Pictures can be printed directly – no PC needed – by Bluetooth via Pictbridge and the phone has a 1.8- inch TFT 262k screen.

The consumer-oriented CF61 also comes with a music player, Bluetooth and exchangeable covers. The integrated 1.3-megapixel camera allows capture of nine images in quick succession and a voice commentary can also be added to pictures. There’s also a built-in music player supporting the usual formats.

Finally, the wedge shaped E61 comes in orange, yellow, or silver, with a built-in VGA camera with 2x/4x digital zoom.