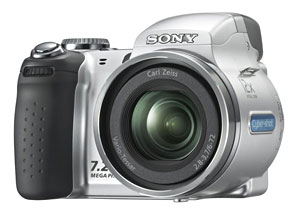 In a flurry of press announcements, Sony have announced no less than four shiny new cameras to add to their popular range of digital compact cameras.

Sony Cybershot DSC-H5 and DSC-H2
It seems that they liked their Cyber-shot H1 so much that’s it’s spawned two new updates, with both featuring an image stabilized 12x optical zoom, electronic viewfinders and a host of exposure modes including manual, aperture and shutter priority.

The bigger brother Cybershot DSC-H5 sports a 7.2-megapixel CCD with a man-sized three-inch LCD screen, while the DSC-H2 serves up 6 megapixels and a more modest 2.5 inch screen.

The combination of Sony’s Super SteadyShot optical image stabilisation and high sensitivity settings (up to IS0 1000) should let all but the shakiest folks on wobbly shoes get sharp pictures. 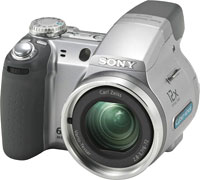 There’s some useful manual controls on the DSC-W100, with a manual exposure mode giving up to 46 steps of adjustable shutter speeds (30 – 1/1000 sec) but there’s only two steps of aperture control available.

Battery life is an impressive 360 shots on a single full charge, with the W100 coming with 64MB of internal memory and the W70 58MB. Both cameras use Sony’s Memory Stick storage.