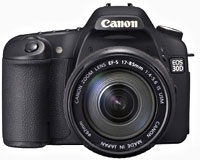 Canon have unleashed a veritable avalanche of new cameras today, with no less than ten new models being announced ahead of the PMA 2006 show.

Canon EOS 30D
Top of the pile is the 8.2 megapixel Canon EOS 30D, which is something of a minor tweak of the EOS 20D, offering a slight body redesign, 3.5% spot metering, selectable continuous shooting speed, 100,000 shutter cycle life and a larger LCD monitor. 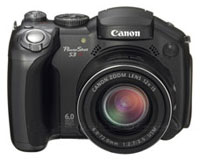 The successor to the popular S2 IS, the camera offers the same monster 12x optical zoom, with new features including a larger 2.0-inch vari-angle screen and an increased sensitivity range going up to ISO 800.

This is the first ever ultra-compact from Canon to feature built-in image stabilisation, and with a host of auto, scene and manual modes looks to be a very versatile camera.

Both these 6-megapixel cameras feature a 3x optical zoom and High ISO Auto and ISO 800 settings and seem identical apart from the lack of an optical viewfinder and bigger 3.0 inch LCD screen on the SD630.

Canon Powershots A700 and A540
Turbo-boosting its ‘A’ series range of compacts with gusto, Canon has announced no less than five new models.

Keen photographers might like the look of the PowerShot A700 and A540 cameras which offer 6 million pixels, full photographic control, 2.5-inch screens and the option to add conversion lenses.

Both should be available in March.

Did we ever mention that we think DPReview is great?