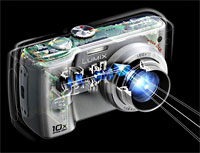 Panasonic have released two additions to their popular Lumix digital camera range which the company are claiming are the world’s smallest in their categories.

The Lumix looks to be faster than grit off a shovel with its new Linear AF system claiming an industry-leading high speed AF performance, with the makers boasting a super-nippy shutter release time of 0.006sec minimum, a shutter interval of approximately 0.5 seconds and up to three frames per second in full resolution.

After the dire high ISO performance of the Lumix flagship model, the LX1, we were happy to see the new Venus Engine III claiming to “dramatically reduce noise levels at increased ISO settings”, with ISO selectable from ISO80 to ISO800 (with a High Sensitivity Mode from ISO 800-1600).

The new High Sensitivity mode allows low light shooting up to ISO 1600, with the built in Optical Image Stabiliser keeping the shakes at bay.

The f/2.8, Leica zoom lens gives users a handy wideangle range of 28-102mm equiv., and the camera come with the usual smorgasbord of scene modes for every conceivable occasion.