Now holding the record for the fastest-selling debut album in the UK, the success of young British indie-rockers Arctic Monkeys shows how the Web has changed both the way in which bands promote and market themselves and how people find new music.

Before the Web, keeping in touch with fans (and prospective record buyers) was a tough business for unsigned acts.

For most bands, their only point of contact with their audience was at a gig and once their knackered Transit van had spluttered out of town, there was little prospect of keeping fans notified, short of setting up expensive snail-mail mailing lists or local poster campaigns.

But the Internet has changed all that.

When a band leaves the stage these days you’re more likely to hear them clearly shout out their Web address than a mumbled “thankyougoodnight” and any leaflets will be festooned with .com addresses.

For less than the cost of a handful of flyers, bands can set up their own Websites, offer free downloadable tunes, sell merchandise, maintain free email mailing lists and invite a dialogue with their fans.

The Arctic Monkeys built up their formidable fan base after handing out free CDs of their tunes at early gigs in 2004.

Excited fans uploaded the songs onto file sharing networks to share with others as the buzz around the band built up a head of steam.

Suddenly venues were packing out and the band were astonished to hear punters singing along to songs before they’d released a single record. 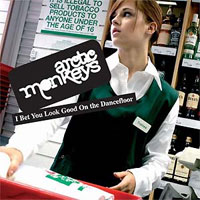 With a growing fanbase clambering for more, it wasn’t long before record companies were begging to sign up the band, and last week’s album release on Domino Records saw the Artic Monkeys record-breaking leap up the charts.

Of course, it wasn’t just the Web that made the band a huge success, it was the chuffing great tunes, but it does illustrate how the Internet is changing the way some consumers discover new music, and how bands are able to exploit these new possibilities.

It’s just a shame that the MP3 age arrived after the ‘zenarchist’ KLF had left the music business.

Now that could have been real fun!

KLF: how to have a number one the easy way.