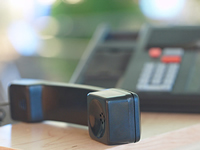 How do ‘Normal’ phones work?
Traditional telephony networks aka POTS (Plain Old TelephonySystems) are based on a network fabric using TDM (Time DivisionMultiplexing), a technology that’s been around for a longtime.

How does a POTS call work? When a call is established between two phone users, a “virtual circuit” is established between them and a certain amount of bandwidth reserved across that circuit (usually 64Kb/s). That bandwidth is reserved for the lifetime of the call, even if no-one is speaking. As the connection is synchronous, ie. when someone talks, the voice is sent across the network in the sequence that it was said. This occurs until the end of the call.

It’s different with VoIP
With the move to VoIP, voice first gets digitised, turned into small packets, which are then encoded into IP packets, in turn sent across an IP network. The packetisation actually adds overhead (takes longer and adds to the size), leading to VoIP sometimes utilising more network bandwidth than traditional telephony methods. Of course this can be mitigated by using modern CoDecs (the digitisers) which use more compression than traditional telephony. Unfortunately the more compression used, the lower the call quality. In a mobile network, voice is encoded at 13Kb/s (which increases to 20Kb/s+ when packetised – as an example of the overhead). People are used to this reduced quality, despite it being noticeably different from a phone call using a fixed-line.

Using VoIP over the Internet is a hit and miss thing. We know the Internet is fantastic at coping with problems – if there are network errors, the data is re-routed around the black-spots, and when the error goes or traffic gets congested, it just re-routes the data somewhere else. It’s best to think of the Internet as a loose collection of around 30,000+ networks that happen to interconnect at various places.

Where the re-routing works for general Internet traffic, it’s terrible for VoIP as there’s no guarantee that the VoIP data will arrive in an orderly fashion i.e. the first bit of traffic may go one way, then second another and the third another route completely. Each route will have be working at different speeds, so the 3rd piece of VoIP data may actually arrive at the destination first – imagine the third word of the conversation arriving before the first.

Packets arriving in a different order is expected on the Internet and it was designed with this in mind. IP can reassemble the data and put it all back in the right order, but to do so requires large buffers i.e long delays. Unfortunately for VoIP, delay not is something you want as that’s when calls break-up or crack and pop.

In the trade, the packets arriving at different times (relative to a clock signal i.e. like a metronome) is called Jitter.

VoIP in an ideal world
There are ways to get around this. Such as new technologies like IP/MPLS (IP/Multi Protocol Label Switching) which is a way of ensuring all traffic between two points goes the same way (with back-up routes, in case the primary one fails). It also allows for Quality of Service (QoS) metrics, so VoIP traffic can be prioritised over say Web traffic, minimising Jitter.

Many telecoms companies now run IP networks utilising IP/MPLS, but as they still interconnect over other, public connection points any quality metrics are lost. So as long as all your IP services come from the same supplier, you’re unlikely to be able to maintain QoS.

When does VoIP make sense/when not
VoIP does gives increased flexibility and anyone with a multi-site operation should consider it. If they’re currently paying bills to a telecoms company to transfer calls between sites, the use of VoIP is generally a no brainer, as it give a rapid payback for the added VoIP equipment required.

When to think twice about VoIP
Single site businesses, should be wary. Installing VoIP can consume significant resources when converting from a traditional system in particular using VoIP may require extensive reworking of an internal LAN – you don’t want your phone calls to stop when someone transfers a large file between their PC and the server.

It may be better to look at other options such as Carrier Pre Select (CPS) or Wholesale Line Rental (WLR) or simply another telecom’s provider whose rates are better.

Security implications and therefore costs are a significant issue. The increase in network traffic that VoIP can bring can have other cost implications, such as ensuring firewalls are “chunky” enough to support the VoIP traffic.

One area that isn’t often spoken about, but we feel is a big weakness of VoIP is the potential of all phone calls in and out of the site that are carried over VoIP being lost to a DoS (Denial of Service) attack. Protecting against attacks can be difficult, as the attacks may just look like remote workers trying to establish VoIP calls into the network.

Conclusion
VoIP isn’t a panacea. While it can offer savings and great flexibility, the choice shouldn’t be automatic. Look at the whole picture and work out if there really are savings to be made. If there’s no ROI (Return on Investment), then VoIP is an expensive new toy.